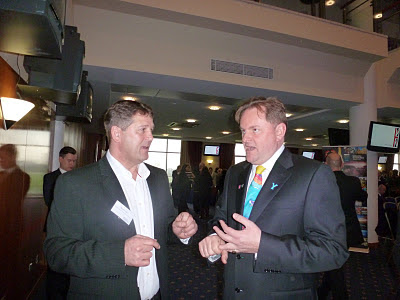 ...One from a boxing ring ,the other as chairman of Welcome to Yorkshire,Today I had pleasure in introducing Henry Wharton to Gary Verity at York race course. We were there not to have a flutter on the horses but to listen to an address by The Secretary of State for Culture,Olympics,Media and Sport event RT Hon Jeremy Hunt MP. And what a nice chap he was- he sounded to really like Yorkshire -hopefully this was not just political talk. He spoke about Yorkshire very warmly and all that we had to offer. He had stayed in God's Own County on more than one occasion previously.
Gary was sporting a very colourful tie apparently a masterpiece of his daughter Lily. So maybe in a few years time we will be talking more of Lily Verity than Hockney. MP Hunt spoke how lucky we are to have Gary Verity working for us all and don't we know it. I am really looking forward to the Y12 which is going to be held at the Barbican in York in March.
Henry Wharton, the super middleweight British,Commonwealth and European Champion is opening a boxing gym and fitness centre in York very soon. It all sounds very exciting.Today Henry was accompanied by his charming wife Amanda who is just as enthusiatic about this new venture as he is.
Posted by Anna Lupton at 22:51