Mrs Bell has been making cheese since the 1980s ,so is quite a dab hand at it by now. Being a Yorkshire farmers wife was never frightened of hard work . This paid off when they launch their cheese at the Great Yorkshire Show and later that year won a 1st prize at the famous Nantwich International Cheese Show. Starting with sheep milk they have gone on to use not only cows milk 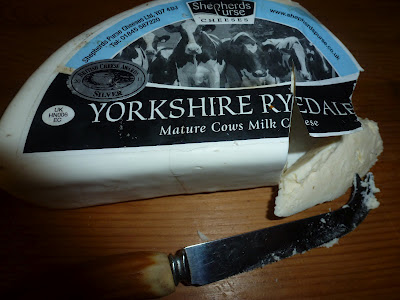 but buffalo milk too . My favourite is Yorkshire Ryedale. There is also one called Byland Blue which goes very nice with ginger biscuits.
Posted by Anna Lupton at 20:54