The grandchildren got guinea pigs for Christmas. And guess who looks after them. On the days they come to the farm they do come, stroke them,get a lot of pleasure from them. Rubi has KitKat, Martha  has Sweety Pie and Emmy has Peter and Pete.  We got Pete to keep Peter company, but then they fought. Apparently this is what boy guinea pigs do.  They had to be put in different homes so that defeated the object of them keeping each other company. So surprise ,surprise the other day when I went to feed them and found there was ANOTHER. I had seen Sweety Pie which had been called  Butterscotch for the first few weeks, 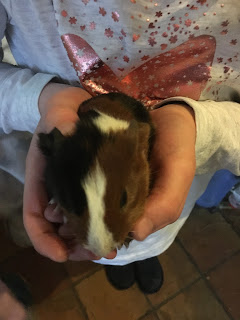 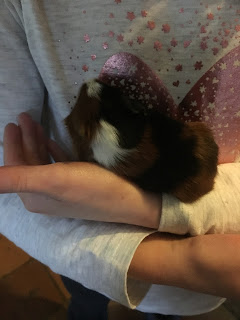 had made a nest and was laid out rather like a madam on a chaise longue, but didn't dream for one moment she was due to give birth.  Now talk about the immaculate conception ,but in real terms she would have been no more 4 weeks old when she had got mated. Before we got her I hasten to add. So here you see Martha holding her baby guinea pig and you can see how tiny it is as those little hands are only 6 years old . . Grandma rules and so one has to go.... Pete has now gone to his new home with a lady who has just lost her guinea pig, so will be living with very experienced hands.  We have a guinea pig pot so the money will get saved up and as we get an addition, another one is sold. We already have an order so reckon it will be KitKat turn to produce next ,so it will Rubi who gets a first hold of the baby g.p. Let's hope that this will give them business sense for later years.I think far too many children these days think money grows on trees and unfortunately I havent found a tree like that yet . Horror though I hear guinea pigs can have as many as 7 in a litter.  Lessons in marketing skills now girls ....Stick with Grandma ,no need to go to school .
Posted by Anna Lupton at 16:54