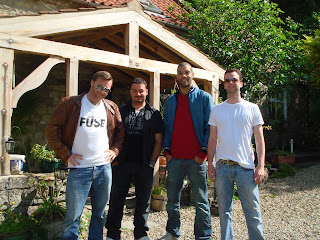 Recently THE FUSE were playing in North Yorkshire and stayed with us. A pop rock fusion band- what great guys these were. When you hear of groups who trash rooms,are very demanding and cause chaos. I imagined them dancing on my dining room table but I can say they were so polite and very charming. If I had a daughter I would have been very happy had she brought any one of these lads home. How civilized it was to listen to the talented Alex Newberry's voice belting out in the middle of the North Yorkshire countryside rather than have to trail all the way down to listen to them on the London circuit. Backed by the equally talented Jake Blair,Simon Bowsker,Mike Varnavia and Kiki Dugdale, you see the group relaxing in our Yorkshire sunshine as they are preparing to go on tour around Europe before heading off to Los Angeles to to cut their new album. THE FUSE are the recently reformed group from the original LATO. Their website is www.thefusemusic.com and will perform a headline gig at MONTO WATER RATS THEATRE in London on the 25th July
Posted by Anna Lupton at 15:38