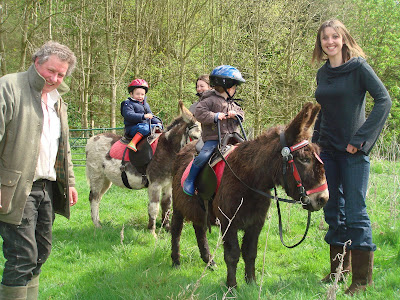 Does not seem a year since we had Jacks "Heinz" birthday party. I was going to have just a small do this year but my poor Dad is stuck in Northallerton hospital and is not at all well so we decided not to celebrate as such . I made a big cake for Jack with 24 eggs and lots of cream and jam in the middle . Little Owen and Jack -Jacks grandchildren came up this morning and soon were having second helpings of the cake. Here you see Jack with them on the donkeys, my friend Jennifer has kindly lent us for the summer. It doesn't seem nearly 30 years ago since Nicholas had a donkey. He used to ride to the farm on it every day for his lunch then by the time he was half way home still holding on he had fallen asleep. I hope Rubi-Sue will soon be coming for her first ride.
Posted by Anna Lupton at 13:00