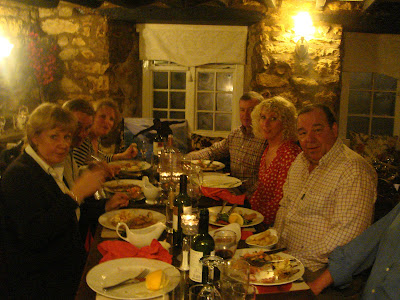 We all gathered up at the White Horse in Ampleforth last night for an early St Valentines meal.And Tony Fawcett unveiled his photo of a surfer which he claimed was him.the photo is in the window at the end of the table He was just a few stone lighter in the picture and had a healthy head of hair too. However we all had a good and late night.Morning came to quickly for us oldies. We all had creamy garlic mushrooms to begin with. which was superb.Followed by a variety of main courses and lots of red wine. Tony who was obviously trying to keep that svelte surfboarding figure of his, had polished off a Chinese take away when he got home along with some more red wine.His children had brought home this earlier in the evening and he had not wanted to disappoint them by not eating it.
Hoping everyone gets a card from someone special tomorrow.Apologises if I haven't being blogging as often as usual but we are busy as the season is getting into full swing again. I planted over 500 bulbs this last week. The new bathroom is coming along nicely but there are things to get organised and paint brushes are being brandished. Jack has taken over with looking after the pups which are adorable but I am getting ready with the paperwork etc for them to go to their new homes soon..
Posted by Anna Lupton at 18:20