Oh I do like to be beside the Seaside....

There was no brass band playing but the sun was shining. This week we have been having a new water tank fitted.We are on spring water and had to comply with new EU regulations.We were not sure how long it would take I had to block a few days out in case we had mishaps. On Monday, the hottest day of the year as we expected had no water but by Tuesday it was back on in full flow. Susan and I went on the beach after we had eaten a wonderful supper at CoGonis - another post-. It was surprising how many youngsters were on the beach playing with footballs. Some had even braved the North Sea and were in the water. I thought it was big bubbles on the sand as the tide went out by it was in fact little jellyfish.Scarborough,Whitby,Filey with probably Sandsend being my favourite are have really good beaches and if the weather is right you cant wish for anything more. I had planned to get away for a few days but really there is no where better tha 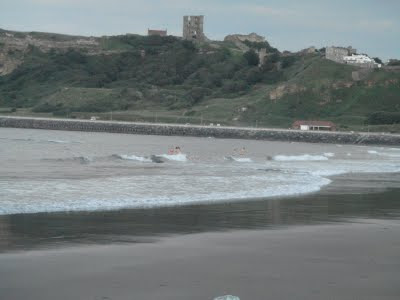 n round here.Jack has been telling me that for ages and I tend to agree.
Posted by Anna Lupton at 22:43