As a child coconut haystacks were a luxury. My Aunty Marma made the best haystack maker in the whole wide world, well in my world as a 3 year old. Marma's real name was Florence Marjorie and she had been a nurse at one time at the isolation fever hospital in York, which is now Fairfield Manor. On her days off she used to come back to stay at the family home and make treats of coconut haystacks. I would only be around three years of age and allowed to sit on the kitchen table and help mix in the sugar and eggs to the coconut. That was the easy bit stirring up the mixture. The next stage was harder as the shape was formed by wetting the inside of an egg cup and then pressing the mixture in tightly. Shaking it out on to a baking tray was far too skillful for a 3 year old. Any attempted usually ended up with what they would these days call a 'deconstructed haystack' in other words a disaster. The next testing time was having to wait for them to bake and to come out of Granny Preston's oven. Why on earth, when she was only about 4ft 10, was the cooker stacked up on 3 bricks in height. She couldnt even look on the pans to see how the contents were cooking. Deep frying was a potential danger, but on Fridays, Mrs Maw the housekeeper would take her role on as cook with great gusto. Beating the batter with the strength of a heavy weight boxer to coat the fish. It made the best fish and chips. My Grandfather insisted on mushy peas been home made. They were disgusting and to this day I still turn my nose up at them . He used to dry his old peas out that he had grown in the garden. These were passed their best and if they had been cooked like that would have been like trying to eat bullets. They were then stored in a old Horlicks jar and kept on the top shelf in the pantry. When they were needed they would be put in a bowl and with a teaspoonful of bicarbonate of soda and soaked in water overnight. Anyway now the coconut haystack are ready to be taken out of the oven. Thank you Mary Berry for the recipe as I could actually remember the ratio of ingrediants. The haystacks should be crisp on the outside and soft in the middle. Slightly brown at the top of the hay stack. Mary made hers' pink but Marma used to put a quarter of a glazed cherry on top if there was any spare in the pantry before they were baked. 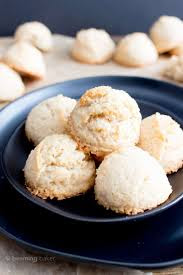 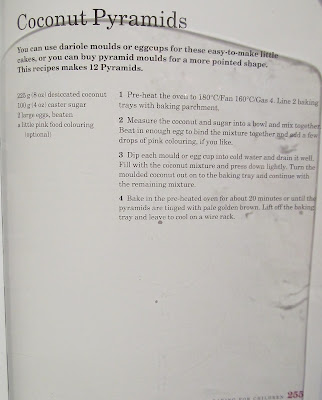