Cant believe how long it has been since I was in York Centre during the day . The last time I was there was 27th Jan 2020. I was drawn to the City as I was attending a Welcome 2 Yorkshire PSMG board meeting at the Grand. I have been on the board now for nearly 10 years. As a meeting was long overdue I wasn't going to miss this one. It was held at 2pm,so perfect timing as I was able to catch up with Heidi Hatfield, who I have known for years. Heidi worked at the Tontine when it was taken over after the MCCoys sold it.It never was quite the same after they went. Heidi left too, for the bright lights of London ,Twickenham to be exact. Heidi has now taken a position up at the Grand in sales ,so it was a perfect place to grab a bite of lunch before the meeting. Knowing a lot of the same people in the industry we found plenty to talk about. We were both tempted to have the Scotch egg which came with perfectly runny yokes. It always amazes me how chefs can get the eggs peeled and coated in sausage meat without breaking them. Maybe that is why they are called chefs and I am just a cook. Glad Jack is happy with a hardboiled egg underneath the sausage meat. There were some beautiful flower arrangements in the foyer and I kick myself that I didnt take a photo of them. Out into the still bright sunshine at 4 0'clock. I got my camera out, even after seeing the Minster in the distance hundreds upon hundreds of times I still took the obiligatory photo of it .Well after all this time away I did feel rather like a tourist. 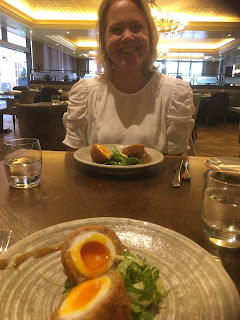 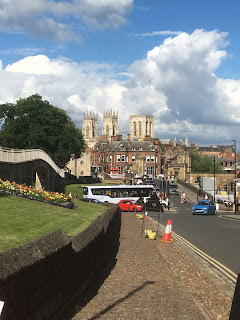 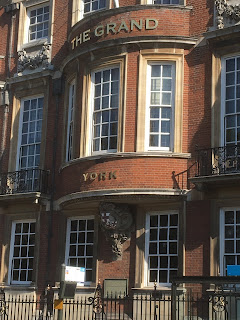