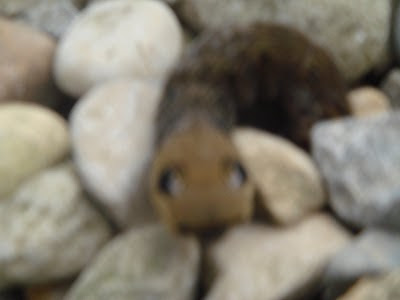 We thought we had been invaded by something from outer space or found some creature left over from prehistoric times. The photos a bit hazy -Jack must have had a wobble on - We hadn't a clue what it was . The young Labradors were amused by one the other day and were barking at it . I took it over to the farm and presented it to Nicholas as I had gingerly poked it on to a plantain leaf and put it into a container and taken in over. I proudly put it in front of him on the dinner table and said -"something here for you". He knows me of old and carefully opened it.Steve, a retired agronomist was lunching too and he knew what it was straight away and went out to his car to get his butterfly and moth book. It was indeed the caterpillar which turns into a Elephant Hawk moth. It looks to have 2 sets of eyes to ward off predators but in fact they are just marking on its body. Very clever. When it finally turns into a moth is it very pretty with green and pink markings. I brought it back home and put in down near where Jack had found it . Only when I looked at the photo I realised it wasn't that clear so within minutes I rushed out again with the camera. Frantically searching I never did find it again. Hopefully we will see it when it turns into a moth.
Posted by Anna Lupton at 23:00