Jacks birthday before the big 6 0

Tuesday was Jacks birthday.I decided -for my sins as if I didn't have enough jobs to do- that I would invite a few old acquaintances over for supper to celebrate Jacks birthday. A few got to 20 plus. It was certainly a surprise as 4 hours before hand Jack didn't have a clue.It was all being got ready under his nose.I then started to lose things I had hiddena dn so I had to tell him. 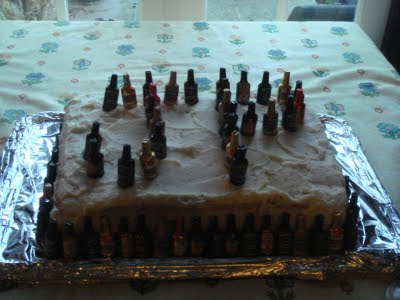 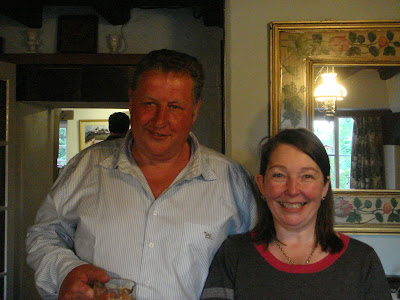 I think he thought I was acting a bit strange but then that is quite normal so nothing seemed amiss. I am sure a good night was had by all.Best friends and old racing buddies came from far and wide -now he is planning his next one. All he said was "well I wanted to got to the White Swan really"-in Ampleforth- so we went tonight instead.Jack had their giant fish and chips which could pass as whale and chips and I had a chicken Caesar salad. Both were very good. Washed down with Pimms for me and red wine for his Lordship. I am not very good on icing cakes so it was the usual "snow" scene with 59 miniatures bottles of liqueur around it.
Posted by Anna Lupton at 20:50