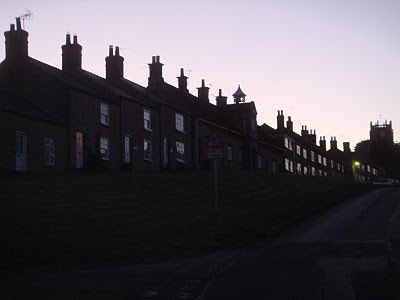 It is not the chimney pots that Dick van Dyke and Julie Andrews danced between on the roof tops of London in my favourite film Mary Poppins , but the left hand side of the street in Coxwold heading up to the church which I capture last night just as the light was fading. I think I was about 6 when I was taken to see Mary Poppins at the picture house. It was the first time I had ever been out late at night I guess we were home by 8pm but in those days it was a great adventure. I think I will be able to count on both hands the time I have been to the flicks which then became the cinema in my whole life. The second best film I saw was Madonna in Evita and that was when it came out second time round. I think she has the most amazing voice. As I have said before memories are marvellous things.
Must go as a chocolate cake and an apple cake are waiting to come out of the Aga and don't want them to burn. Guess I will have to sample them before I go to bed.
Posted by Anna Lupton at 21:38