How does your tomatoes grow...

My Dad is the professional ,when it comes to growing tomatoes.  This year as we have all this extra time to do the things we used to do .When we were young we pack so much into a day. We worked hard, played hard and still found about 4 hours to sleep .This years I set out to grow some tomatoes and see how they compare to my Dads.
Tonight as I was setting my lemon tree straight in a new pot and some John Innes No 3 instead of citrus compost as it didn't seem to like that. I went across to look at my tomatoes. They will soon need rodding so they dont fall over. My dad said yesterday he had flowers on his .In fact he had rung up to tell me the flowers were on his Shirleys . Now proper gardeners talk about the plants by name but not by species. When I called today he was still on about his Shirleys having flowers on . I know what the flowers look like, but mine were lucky to be growing and no yellow in sight .
We have had a busy day. We went to see a tractor that Jack is wanting, so he can top the grass in the dog field and extend the garden making another part of the field for us to make us even more self sufficient . I wonder, will it just feed the rabbits and deer who come on a night when we are in bed.
Then we are sorting out having the drive concreted . The bad weather in the winter and heavy rains has taken its toil on the drive and so we are taking advantage of not be able to  having guests here that we can crack on with it . We have decided to go for concrete instead of tarmac as we had the entrance done a few years ago and it is just more resilient than tarmac .
The first stage is to have a drain put in on the high side of the drive to take in the water that drains off the field and what runs down the road.
So just before I turned in for the night I took a closer look at my tomatoes and lo and behold my 4 largest plants have flowers on them...Now the race is on to see who has the first formed baby tomato or Shirley as my dad would refer to them as . 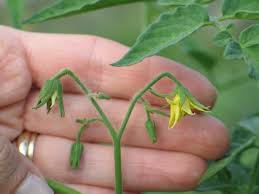 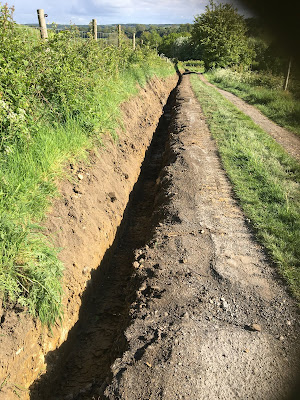