Aren't we lucky to have the telephone .
When I was small you had to queue to get into the telephone box and you had to have 4 of those big pennies to make a call. Slot them in and when the person at the other end answered you pressed button A and if no one answered you could get your money back by pressing button B. And you could talk for ever until someone came and knocked on the door and  scowled at you or opened the door and said a few obscenities to you . And if you followed a person in who had been smoking while on the phone, which often happened in those days ,you had to hold the door open as it was on a tight spring with your foot while letting some fresh air in.
I have known Sue Smith for donkeys years. I remember talking on the phone to Sue when Mandy, her daughter, won the Yorkshire's Dairy Queen title and son Peter was the best sheep shearer in the country. There were sad times too, when Alan her husband died.  Jack always shouts down the phone if he knows she is on the other end "How is Lady Kingfisher..." and you can nearly see her smile at the other end remembering her time in the village play when she played the part. We used to share car rides to Bed and Breakfast meetings together which were of course arranged over the telephone.  I always remember when she picked me up one time admiring the stable door into one of my guests rooms. Soon after when Sue was converting some of the farm buildings into holiday lets she too added stable doors. her business grew and grew ,she had tireless energy and always had tales to tell of her guests and likewise me of mine. I remember how some guests complained as one of there cows was in bulling and had bailed all night. This was a real working farm, this is what happening .Calves aren't found under gooseberries bushes.

So when we were not allowed out as such at the moment , you get in touch by phone to your friends and after passing on news of what is happening in the world today, we go back to talking about the good old days .
So it wasn't strange to pick up the phone for a chat on Friday night. An hour can go by very quickly when you go back so far as we do.
Sue was very ill the other year and no one expected her to last the night but she bounced back thank goodness.She has retired from doing accommodation, only to speak with glee when she told me she has a part time job ...Really ....  really is a word which Sue uses quite a lot so I thought it was apt to add it here .... she is volunteering at the hospice shop in Helmsley for a few hours a week .

So you wonder why there is a photo of a bowl of fruit.... well we were on the phone so long I managed to clear the work surfaces ,wash the kitchen floor and then stew some fruit .... brambles for the Autumn ,some raspberries and blackcurrant and a few grapes. I had frozen them all separately on trays and then mixed them together and just take out a handful or two as I need them. Dont know when I will be able to have guests again so I am using them up . As we were on the phone I said what I was doing and said sorry I couldn't send them down the phone to her but would send a photo so here is the photo ,Lady Kingfisher and here's to many more years of friendship x 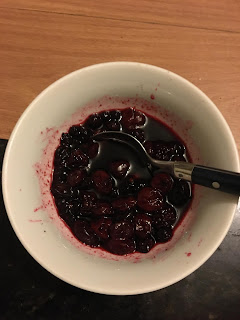 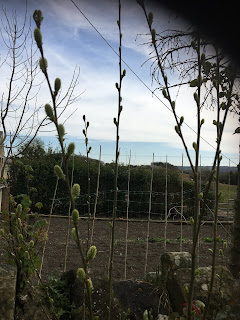 [ well Susan is local too and understand me saying me and we would never say my we would say me ..so it isn't a spelling mistake]