Sunday would be Sunday without ..

Yorkshire Puddings.
The original purpose of serving the batter pudding was not as part of a main meal, in the way that it’s served with traditional roast dinners now, but instead served before, with gravy, as an appetiser course. This is because, when meat was expensive the Yorkshire pudding could act to fill the consumer, meeting the appetites of working men and allowing the meat to stretch further: “Them ‘at eats t’most pudding gets t’most meat”, as the saying goes.

For those of you who are not familiar with Yorkshire Puddings Elaine Lemm, a local lass and columnist, has written a book  just on Yorkshire `Puddings. I have often bought it to give it to friends in different parts of the world.

My granddaughters have had Yorkshire pudding matches to see who can eat the most . We used to have fun as I would let them have another and another when their Daddy wasn't looking   as he felt they should fill up with meat and vegetables. We always have Yorkshire Puddings as a starter course.
One of my little treasures say GranAnna =that is me , makes the best Yorkshire puddings in the world.
I think Marthas record is seven but she will probably say eight  . .They are all good little trenchers but have their own ideas of what they like best. Martha likes raw carrot and prefers fruit to sweets, Rubi when she was very small amazed us by loving olives and Emmy likes quite plain things .Her potatoes left in pieces with butter rather than mashed.

Jack likes gravy with his Yorkshire puddings while I dont really like gravy and when my uncle was living we both used to have our Yorkshire puddings with treacle..well golden syrup .Yes and that was to begin with and we never washed our plates before stacking it up with roast beef and vegetables .Maybe this was the sweet and savoury which is a Yorkshire things.

We have Christmas cake with cheese, apple pie with cheese . And Jacks Dad would say either of these was like a kiss without a squeeze if there was no cheese served . And it needs to be Wensleydale for the ultimate effect.
When Lockdown is lifted and guests are coming again ,a nice ride into the Dales to Wensleydale Creamery is recommended. It would be classed as Micky Mouses's favourite destination with eye watering displays. 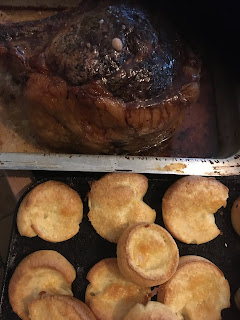 of cheeses and to suit all palates as long as you like cheese even Cheese with Champagne
Posted by Anna Lupton at 20:56