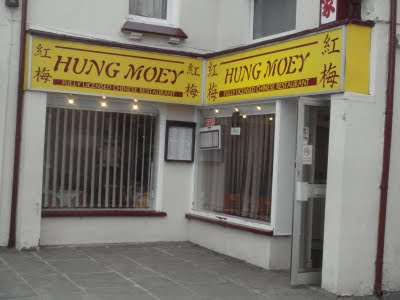 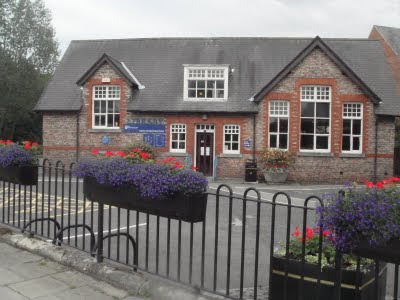 It was Alf Wight the local vet better known as James Herriot who put Thirsk on the map.As a child I went to the dentist here. It was right next to the vets surgery which is now the James Herriot Museum. Sometimes I do my shopping here as it is only 10 minutes down the road from home. I often write about the places we go to eat at. About 4 times a year we get a take away ,or a sit down banquet, from Hung Moey - I wonder if translated it means Hungry Me. You certainly aren't that when you come out. They have a sit down restaurant as well as a take away. It has been there "forever". When it first opened the Chinese people who run it used to come around the local farm to buy ducks and chicken. I suppose this would be my introduction to foreign people as 50 plus years ago it was rare we ever saw anyone who was from outside Yorkshire let along another country. Another place I like to go is Thirsk Library. Just about the right size. Not too big that you spend all day deciding which books to get and not too small so you don't have a choice. They always have lovely flower boxes at the front. It is very accessible as they also have a car park. We should use our libraries more often as like with our Post Offices -if we don't use them we will lose them
Posted by Anna Lupton at 22:10

My Dad wins the Burtt cup for the best vegetables 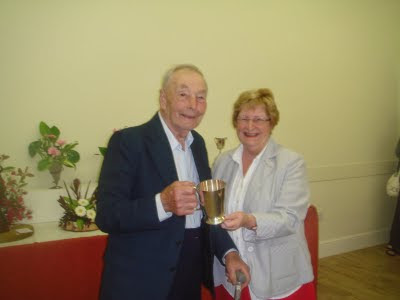 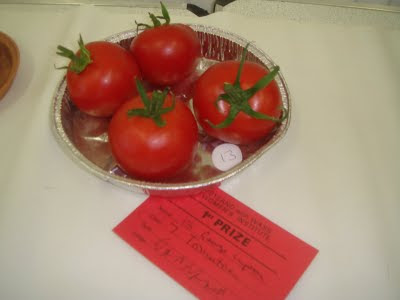 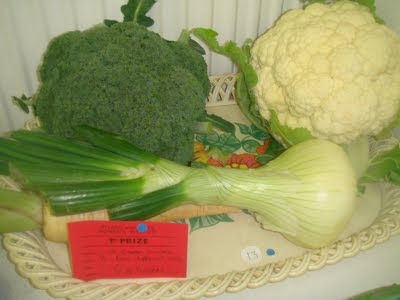 Last Saturday it was the 65th Wass show. My dad has entered his garden produce there since it first started. I remember as a child it was always a last minute rush and chaos. I was busy doing breakfast so Jack had the task to get my Dad and his entries to the show. True to form Jack had to go back to the farm as they had forgotten to pick up the cabbage. I went down when the show opened in the afternoon as my Dad was eager to see what he had won.He really didn't have time to go ,as at 88 and three quarters, he was busy in the hay field. He had won 4 first prizes. -tomatoes,shallots,lettuce and a plate of 4 vegetables. and was the outright winner in the vegetable section.His rose was not far enough out. He knew he didn't stand a chance against Mrs Gilruths leeks and his potatoes were too big. Everyone was so pleased for him. I was ordered to go back to pick him up so he could receive his cup in person. He doesn't like the photo as he says it looks as if he hasn't any teeth . He is proud of his teeth as they are all his own.As this is the only photo I had so he will have to grin,-toothless looking or not,and bare it. So now I can offer my guests not just award winning tomatoes but first prize ones
Posted by Anna Lupton at 23:00 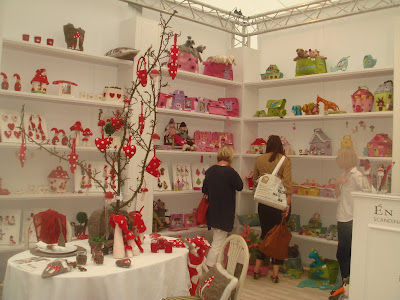 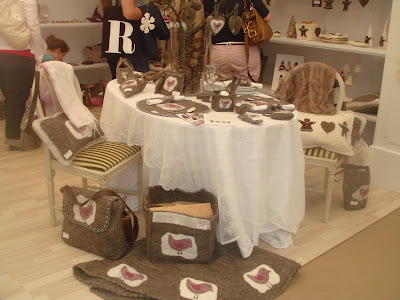 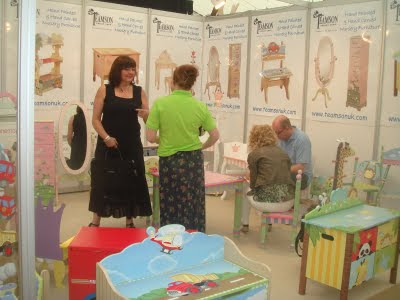 My visit to Harrogate was two fold as I went to the Home and Gift exhibition too. It is 5 years since I went. After serving breakfasts and leaving Jack with enough food for his lunch and supper so he didnt die of starvation I set off. Jumping on to a park and ride bus into town made it so easy. Soon I was registered and was looking at all the wears on displays. Lovely to see the new ideas -remembering the old contacts and seeing what is new. All a wonderful melting pot. For some they go everyday ,sip Pimms and take it at a leisurely pace.Leisurely didn't come into my programme .It was off at quick trot, 2 days later my feet are still feeling very sad. Its hard going walking on concrete when you are used to walking on grass at home. There were some lovely things and here are a couple that caught my eye.with Rubi-Sue and imminent baby in minds. The Scandinavian displays won hand down.
Posted by Anna Lupton at 23:04 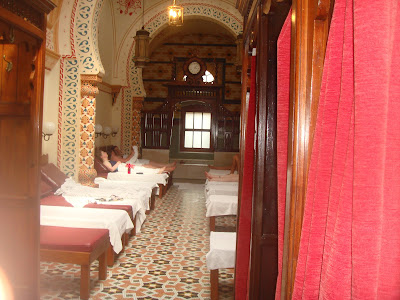 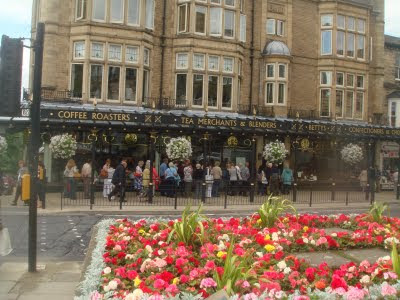 I have always said Harrogate was where mothers went to buy hats for weddings. It is that sort of place. This week I managed to escape for a few hours.I promised myself to go to the Turkish baths. Since it reopened in 2004 I thought my visit was long over due. Apparently it is only one of 7 in the country and is the most popular. I was there on Tuesday afternoon.There was a lady from Helmsley only 6 miles from me who's shop I know with her friend. A mother who had taken her daughter and 10 of her schoolmates to celebrate her 18th birthday, A lady who taught Mandarin from Kent- so a mixed bunch in all. I loved the heat.The cold pool didn't do much for me as I didn't venture in further than my knees. But I soon started to fidget I am not used to doing nothing. Some had taken books to read. I am glad I went but I am afraid it isn't really for me.There is a "massage parlour" too well a beauty type affair. I am quite happy to slap a bit of nail varnish on my own toes - Thank you and as for finger nails I have work hands. I much prefer to be outside in my own little hot tub up in the woods.Here I can watch butterflies and birds.The only thing is Betty's isn't at the end of the road and it is raid the fridge and make my own if I stay at home.Betty's looked lovely decked with hanging baskets and as I past at lunchtime people were queueing to get in. A right holiday treat.
Posted by Anna Lupton at 22:36 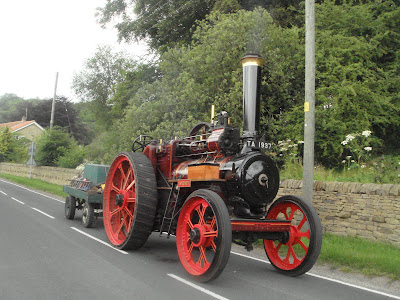 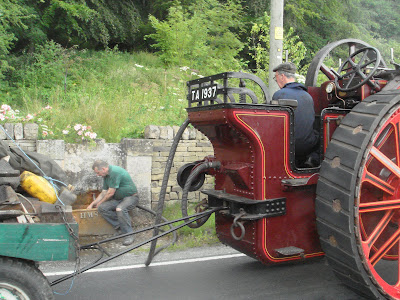 There has been a rally at Helmsley. At the beginning of August there will be another one this time at Pickering. Owners and followers alike go to marvel at these old machines. They are heavy machine and often we get them chugging along past our road end. The photos here are when they stopped in Wass to take on water which comes out of the "lions head". Sooty faced and happy these men are in their element as they stop a while along the way.
Posted by Anna Lupton at 15:53 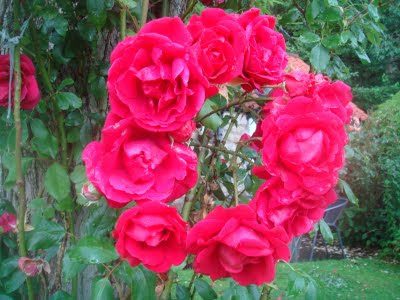 It is the Great Yorkshire Show at Harrogate this coming week.There is lots to see from cattle and sheep to horses and farm machinery. One of my favourite memories as going as a child with my Dad and uncles after we had been to the goats and pigeons was to go into the flower tent. The tent was actually a huge marquee and 50 years ago it was not common place in our lives to see such structures.Plain white ones and candy stripes in all hues.There was something magical about tents. The flower tent was special as soon as you approached it the sweet smell of flowers took over the air. Blooms of rose,sweet peas ,delphiniums and dahlias were on display. Here you see our roses which are all from one stalk. Maybe not quite first prize winners but beautiful all the same.
Posted by Anna Lupton at 14:23