The Best View in Yorkshire -only 7 miles from us

Thanks for all your fantastic pictures of the best views in Yorkshire. If you missed it last night here is Nicola Rees piece from last night's Look North - featuring some of your photos.

Ampleforth Abbey and their apple orchards only 2 miles from us

NATURE’S BOUNTY: Top, Father Matthew Burns, picking the apples in the annual harvest in the orchard at Ampleforth College, Ampleforth, North Yorkshire; above, Tim Saxby, orchard manager. WORK IS under way to harvest the first apples at Ampleforth Abbey to be used in its new venture. Apples in year’s crop will go into the Ampleforth Abbey Apple juice range. It is a new product for the monks who have been producing the Ampleforth Abbey Cider for more than 10 years. It also produces Ampleforth Cider Brandy. Ampleforth Abbey, close to the village of the same name in North Yorkshire, was established in 1802 when monks returned to England, following a 200-year exile in France following the dissolution of the monasteries by Henry VIII. The orchard now has some 2,000 trees and is home to more than 40 varieties of apples including the Ribston Pippin which has its origins at Ribston Hall near Knaresborough. With the area having enjoyed good conditions for apple growing earlier in the year there have been forecasts that the orchard could produce as much as 45 tonnes of fruit this year, triple last year’s figure. Monks are aided in the harvest by staff and pupils from Ampleforth College, the prestigious school founded by the monastery which has around 600 pupils. The orchard and cider mill is open to the public at points during the year with tours led by manager Tim Saxby. Ampleforth’s is one of the most northerly commercial orchards in the UK.
Posted by Anna Lupton at 20:21

Amazing activities but if you cant manage these there is always our www.worldkcf.co.uk

We are situated twixt the Abbeys of Ampleforth,Byland and Stanbrook all shown in this film

It must be 2 years since we have dined at the Hare at Scawton. I don't know why it took us so long to return as it is only 10 minutes up the road from us. Jack is quite a creature of habit so to get him to stray even 7 miles takes some doing. We were welcomed by the lovely Liz who looked after us all evening along with her equally attentive staff. Bread is my failing.Give me bread and butter and more bread and butter and I am a happy bunny. I really, really shouldn't have been tempted but it was warm and delicious and it was home-made bread. I will put some photos on for you to savour as there was so many courses I would have to write pages to tell you about it all. All I can say is I have never tasted food like it before. I have eaten most things from peacock to pigs brains but I had never eaten eel before. As a child I always imagine every Cockney speaking human lived on it. This was smoked and delicious and now I can say I have eaten eel.Thank you Paul. We loved the amusee bouche if that is how you spell it -warm olive oil with Yorkshire feta,olives and other twists and turns "to get our palates ready" for this amazing tasting menu. I think it is the best food I have ever eaten. If you don't go along with meat they cater for fish eaters and vegetarians too. Anyway enough of the reading about it .Just take a look at the photos 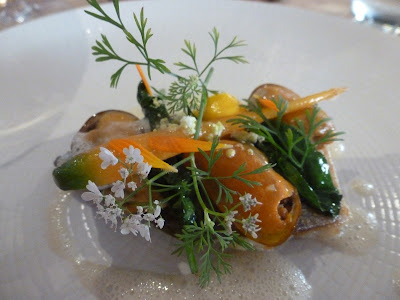 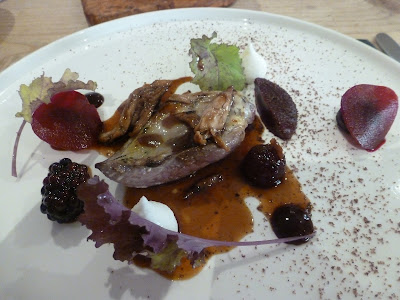 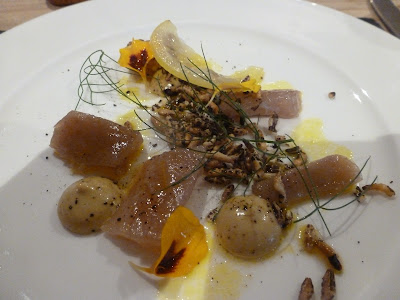