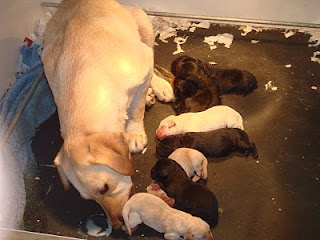 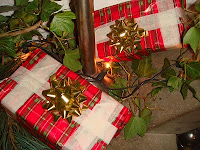 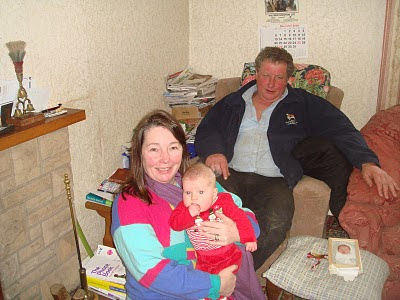 Merry Christmas.
We started Christmas early having goose and all the trimmings for supper last night as I knew we would have a busy day in front of us.I sneaked down to the kennels last night to leave Jacks presents from the dogs then woke him up just gone midnight to give him his. I was up at 5am with Jack as I wanted to see if Santa Claus had been.It is only 11am and we have already been to Jacks mothers to take her to his sisters and then back to the farm to see my mum and dad. Rubi-Sue and her mummy and daddy were already there and Ellor ,Nick's Labrador was joining in the festivities with tinsel round her neck. Then we will be seeing Little Jack and Owen. They are 2 and 3 years old so will be more excited than Rubi although she was taking it all in and liked to see things spinning round.Before it gets dark it will be time to feed the dogs and take them out.After that we will sit down for another Christmas dinner and finally settle down in front of a lovely fire. We have already heard from friends around the globe what a marvellous thing the internet is.Hope you are having as wonderful a Christmas Day as we are. For Christmas one of my presents, which was wrapped up very well,was some Pringle socks from Jack which was what I wanted but in one pair was stuffed a diamond ring. I know I am very lucky to have Jack and the ring..... but not forgetting how lucky it is to have all my family and friends that make it as special as it is..
Posted by Anna Lupton at 10:44 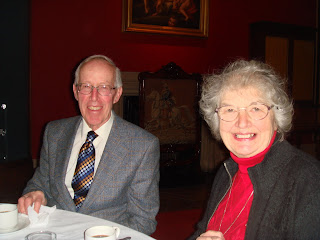 Christmas is a time when you hear from old friends and people who have crossed your path along the way. I read an article in the Yorkshire Post last week written by Elaine Lemm who although I keep seeing glossy publications photos of her havent heard or seen her since her days when she had a bistro in Helmsley. The article she had written gave me the insentive to contact here. It was lovely to hear her news -her main job is with the New York Times' Co writing and editing the site about British food. Isnt it good to hear how the British food flag is been flown in earnest across the Atlantic.
Another email today from Rosemary Robinson who owns Just Puds. I have known both Rosemary and her mum for more than quarter of a century and was recently at Bowes Museum to a early Christmas lunch and took this photo of Val and Graheme.They have just had a big farm fire so our thoughts are with them all at Ainderby Myers as we know what they will be going through after ourselves experiencing a farm fire first hand 2 years ago what damage and trauma that they bring- to young Thomas who lost his rare breeds sow and piglets. Val is an inspiration to us all and however the going is she always has a lovely smile
Posted by Anna Lupton at 17:51

Snow and still very cold but the celebrations have started. 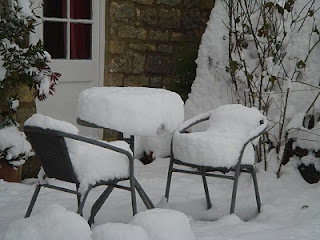 It has been unbelievably cold. Jack has been a saint bringing logs and coal in and he is also better at lighting a fire than I am .The Christmas celebrations have started early we were at Simon Swiers' 50th birthday party on Saturday night braving mega inches of snow to get there. It was 4 wheel drive all the way. It was a 60s fancy dress . I went as a school girl- well I was in the 60s and Jack well decided to keep his shooting coat on and went as Captain Wombwell.As if many people would remember what he wore in those days but it must have been something Jack had remembered him wearing 50 years ago or maybe he was just dead lazy and wanted to keep warm,he did wear a flowery tie though. Yesterday was the Sunday supper clubs' Christmas meal at Wass. Then a mad dash home to watch something on the box-I must be getting old. Tonight is Mark Faulconers party at Coxwold pub. I will first go to drop some Christmas presents off as time is ticking faster by the day.It has been so cold that the diesel in the farms pickup froze and so has the pipes that take the water from the bath. I didnt get time for a sit down but as you can see it wouldnt have been too warm a seat if I had.
Posted by Anna Lupton at 17:37

So snowy in North Yorkshire.... 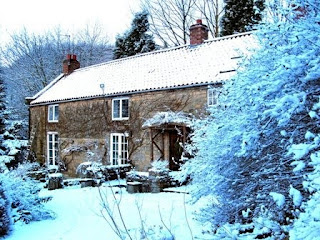 Fortunately we have Jacks Nissan Nirvara to get us from A to B as the snow is pretty deep and there are still a hundred and one jobs to do before Christmas Day. I was hoping to go over to Castle Howard to see the house decorated for Christmas but I have stayed at home and started on things here. I have been out in the woods today getting ivy and cones,holly and fir to decorate the house. It is the smell I love most when it all comes indoor.The cake is made and the ground almonds and icing are on the side ready to put on. No doubt it will be a snow scene yet again. The presents are all laid out on a bedroom floor waiting to be wrapped. Did I tell you I had a marvellous buy at Laura Ashleys last week -for £1.50p I got some very smart black and gold wall paper which will be used as wrapping paper and there is yards of it.I did make sure it was not prepasted though.
Posted by Anna Lupton at 16:33

Last week little Rubi-Sue ,her mummy and daddy and I meet up to do a bit of Christmas shopping in York. At 3 months she has a good eye for the shops and likes to look up at all the lights,decorations and general rushing about of people. She was very patient as we shopped. Hotel Chocolat is just the most amazing chocolat shop I have ever being in.Even Jack who reckons he does not do chocolate ate a bar leaving me a mere morsel .Good job I had a couple of spare bars hidden away. I got some chocolat ginger for my mum and I am sure I will be in there again before Christmas . When I got home I looked on their website which was of great interest -the story of how they acquired a cocoa farm in St Lucia called Rabat Plantation. It brought lovely memories back of when we stayed at Fond Doux Cocoa Plantation when we got married. L'Occitane was another shop I just had to go in . They have aromas that are nearly good enough to eat and their Christmas packages are so beautifully wrapped. Then it was time for Rubi-Sue to go to the hospital for a scan.It makes you realise that the best present you can have in life is your health as money cant buy this. We hope that she is going to get good test results that is our wish for Christmas .Also her little cousin ,Oliver,also has some kideny problems and at 5 months old has had quite a rough ride so lets hope they both have a healthier New Year,
Posted by Anna Lupton at 14:05

I was out on the town ...well village to be more precise last Saturday and did not get back until late. The culprit for keeping me out was my Dad-87 and still going strong..We had an invite to attend the 'bun fight' in Wass Village Hall and what a good time we had.Not so much bun but turkey,quiches and rich chocolate desserts kindly donated. He had been there 81 years ago when the last one had been opened and so he was the star of the show. All the village has rallied to help in their own way to get the village hall rebuilt but special thanks goes to Roger Statham ...for the way he managed with the paperwork and to Phil Nicholls who made sure the building was made to first class specifications.I am sure anyone inspecting the build will soon be on the phone to Phil wanting their building work done.
Now we need to let people know this village hall is here to be used.I am very impressed with its very plush black and chrome chairs .It has a licence so ideal for parties and celebrations I have booked the hall for the 22 June 2010 which is the first free date Caroline Gregson from Cheshire who will be holding a day course on a 3D willow sculptures.Her work is magnificant and you can view this on www.carolinegregson.com.The day cost £60pp and places are already limited.
Posted by Anna Lupton at 18:25