My blogs have been few and far between this last few months. The reason was my mother had been diagnosed with cancer In September 2014 she given 5 weeks to live. She actually lived for over a year longer. Every day was special, seeing the great-grandchildren enjoy Christmas.Her birthday in March when she was 90. And celebrating 61 years of marriage to my dad in September -3 days before his 93rd birthday. He had known her since she started school 85 years before. Very rarely did she travel from the farm ,she had no desire,her life was her family. As one of the doctor who looked after her said "The staff at the surgery think she is like Grandma in the film of Willy Wonka's Chocolate Factory. A lovely way to describe her.And that how it was until the very end. We looked after her at home with the the help of doctors and nurses attending to her daily for the last 11 days and to who we are truly grateful. She was buried in Ampleforth churchyard 35 hours after her passing and some people thought how quick. The reason so she could stay at home for her last night. 64 people turned out for the service which just showed how much she was thought of. She was sent on her way down the churchyard as the sun shone to the congregation singing "Lead me oh thou Great Redeemer" which we could hear through the open door. A large collection as to her wishes to go to Ampleforth Surgery Equipment Fund. Maybe there wasn't such a fund but she has made one now. I thought you might like to see her flowers,it was 100 ruby red roses .Very appropriate really as she was called Ruby. Since then a dear friend of mine has kindly bought us a clematis called Ruby.I am sure she would have approved. 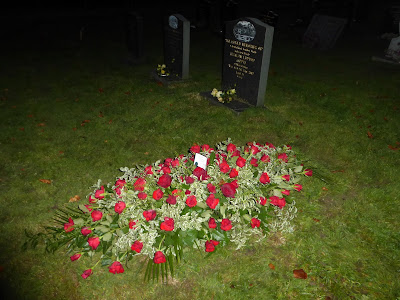