Amazing what our woodland holds. Scarlet Elf Cups is just one of Nature's Miracles.

Jack spied 3 the other morning and so took me up to see them as never in life had seen them before. It was only when I googled them ///thank goodness for Google that we were able to put a name to them . Yes there were 3, but then I look to the right and it was as if they had just sprung out of the woodwork there was hundreds of them. The Scarlet Elfcup displays bright red cups with short stems. It can be seen in late winter and early spring on fallen twigs and branches (often Hazel, Elm and Willow), usually buried under moss. It is reasonably widespread, but not very common. It is mostly found in damp, shady areas. Fungi belong to their own kingdom and get their nutrients and energy from organic matter, rather than photosynthesis like plants. It is often just the fruiting bodies, or 'mushrooms', that are visible to us, arising from an unseen network of tiny filaments called 'hyphae'. These fruiting bodies produce spores for reproduction, although fungi can also reproduce asexually by fragmentation. Hopefully there will be still some about for the grandchildren to see as it is quite near to where they play in the woods and by the stream. As we walked back to the hours we could see how nature is waking up from its winter sleep. The daffodils are pushing through, the catkins are dangling delicately from the branches and the wild garlic is coming through. Another week the ground will be covered with a green wild garlic carpet. If it rains you can really smell the garlic bouncing through the atmosphere 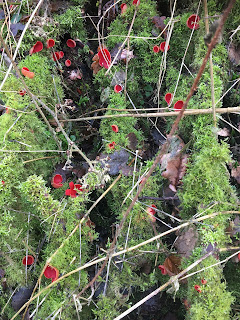 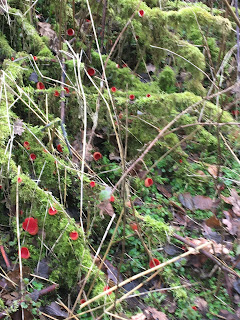 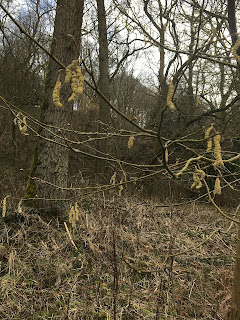 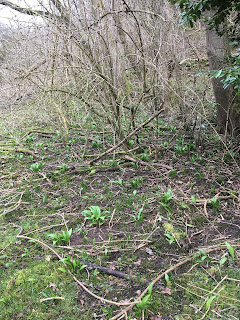 . Even a bumble bee had ventured out to see what pollen he could find. Bobbing and buzzing from one plant to another.It was nice to see.
Posted by Anna Lupton at 15:09