Tuesday was D Day for my Dad as we set off on our second trip to Malton in three weeks. It was for his 2nd Covid jab. A big thank you to everyone who stood out in the cold, directing cars and making sure everything go like clockwork. All went well, till his leg gave way getting back into the car. He ended up on his backside on the ground. Fortunaley no broken bones and two kind helpers came and with a shove, a push and a bit of lifting we managed to get him to his feet. I told the helpers, one of the last time, over 5 years ago, when fell was when he was planting peas in the garden. It was just before he was due in for his dinner.It didnt help that he had just had a full clean set of clothes on that morning. When my mother went out to see what he was "playing at", she was a stickler for meals on time and it was probably 3 minutes passed 12 noon. She discovered him "riggwelted" in a pea row looking like a snow man. My Dad, as many of you know, is a keen gardener and he spread the wood ashes from the fire on to the garden. Wood ash is an excellent source of lime and potassium for your garden. Not only that, using ashes in the garden also provides many of the trace elements that plants need to thrive. As any of you who have empty the grate you will know the grey mucky looking sediment of ash. As he couldnt get up ,had wriggled about and covered himself in ash. Not a pretty site. Anyway yesterday was a doodle of a job as previously he had been well and truly stuck like a sheep. Previously had been well and truly stuck like a sheep . So on your walks and jaunts through the countryside if you ever see a sheep laying with its legs up in th earea this is what we call riggwelting. You need to go up to the sheep and usually just by doing that the sheep gives that extra push to get away from you and there you have saved its life. Sometimes you have to push it over ,so go to the spine side of it and push. Anyway yesterday was a doodle of a job. So now is the time to think about planting your seeds ready to plant out when the weather get a bit better. When the house get turned into a potting shed and the growing cycle begins, here is a photo of my dad in warmer weather in the position he would have been in just before the pea fall. The other photo shows Jack out with the dogs ,the ground is hard and icy so do take care folks as the last thing you need is a trip to hsopital to fix a broken bone at the moment . Eldest granddaughter had taken to her sisters' Christmas present the other day - a hover board- and ended up with a damaged wrist. I would have hoped when I was young and at school I would have had 6 weeks off but no less her she was back to school after the weekend. Stay safe everyone. 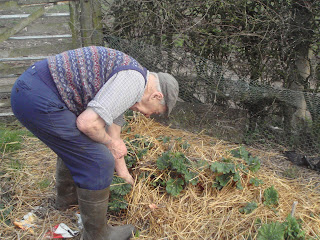 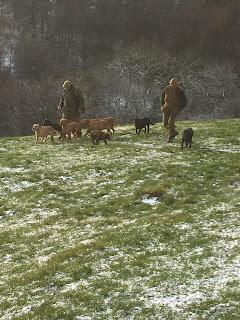 We must look forward. As the days are even now starting to lengthen, just a little bit I know,we start to think about planting seeds and the year start it ever turning cycle. Wont be long until lambing time .Nothing is better than seeing lambs frolocking about in the fields. Even with the Covid hanging over our heads, we still live in such a fast moving world. The years are ticking by. As I said to Jack this morning I cant beleive it is 15 years since we were planning out trip to New Zealand. Social media brings news of our friends who live there now, lighting up screens in our living rooms with photos or sunshine,hazy days and bright flowers. For the many, they have found new vocations in life. I seem to bake more, day dream more and still have a host of things to do with not enough hours in the day. We are lucky to have so many choices and I have lots of hair brain ideas. Well I did find out that there wasnt any courses on how to be a professional scarecrow maker. Then I see something on Pininterst and think ah I shouldnt have thrown that away. I am a hoarder, it is in my nature as when I was young things were not as plentiful as they are today. My parents grew up through the war years, there were hardships and I suppose I adopted their way of making do and mend. Sharing the last piece of cake between 3 was not uncommon and hand-me-downs clothes were what we expected to wear and grateful for them . So what will 2021 hold for us all. I will continue with my little cakes of kindness which put a smile on faces. If anyone has any spare bundt tins or individual cake tins they do not want any more I would be happy to give them a new home. Bundt times are good as they make a pattern in the cake and so it leaves you with very little decorationing to do as the mould has done it for you. I expect I will continue to knit for the youngest in the family as my dinosaur jumper went down well for Christmas and in next to no time it will be Easter. What we all should wish for is Good Health as without that we are nothing so below you will see my dad raising his glass to just that, with homemeade Christmas cake and Wensleydale cheese it is the Yorkshire mans way of welcoming in the New Year. 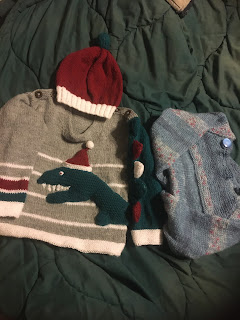 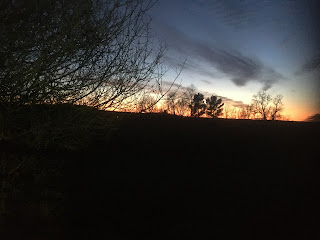 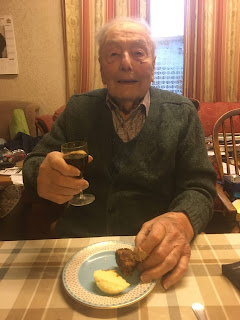 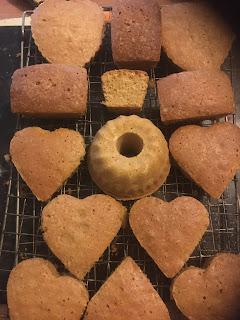