I am busy getting together another page for my website. When guests are staying they can enjoy the scenery and surroundings and all those other things that you cant take home with you.I am now compiling a new page which will give a list of my favourite things to eat and where you can find them. Years ago if anyone went away they would take back a tea towel for their mum . I am hoping to find lots of goodies that you may find interesting to take home in.
Posted by Anna Lupton at 18:44 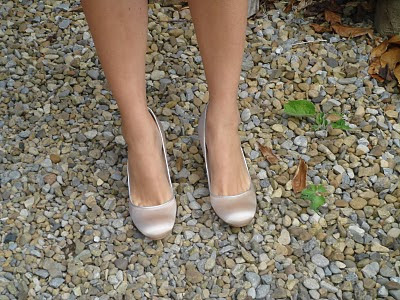 Trillions of guests flocked to North Yorkshire over the weekend to the wedding of the year for a local girl and her beau. It was a very busy time for me with wedding guests staying. I would just like to thank them all for being such considerate and fun guests.I am sure they enjoyed the sunshine and the fresh air as they said outside picnicing on the lawn as quiet as mice. The girls had wonderful outfits and even more wonderful hats. The men looked very dapper in the morning suits.I can only think that a certain university in Scotland had done such a marvellous job of making them the people they are and would certainly recommend sending your "little treasures" there. To the early risers I hope you will get lots of fun from your puppy.Maybe these shoes were not made for walking but were certainly made for partying.
Posted by Anna Lupton at 10:18 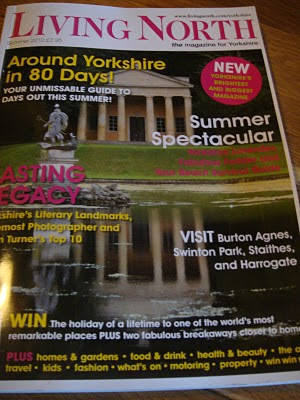 There is a new glossy out and until today I had not heard of it .My friend Judy told me, we had been included in the feature " Around Yorkshire in 80 days". She didn't have one for me to look at so I nipped into Pennitas' as I was in Helmsley and they kindly lent me theirs. I am in fact mentioned twice to STAY A WHILE in the area for Duncombe Park - "Carr House Farm offers all the charm you come to expect from Yorkshire,its countryside and its people.Very romantic and tranquil." The second was when visiting Byland Abbey -"Carr House Farm has been described as a romantics' paradise and the perfect getaway spot,with big four poster beds and super breakfast". Thank you Living North for this but also for producing such a colourful and interesting glossy.I will buying one as soon as I see it on sale. I am sure it will wet everyone's appetites to seeing more of Yorkshire whether they be locals or visitors to the area. I will hide this under a cushion before I put it on a coffee table as it will take me all weekend to read
Posted by Anna Lupton at 20:47 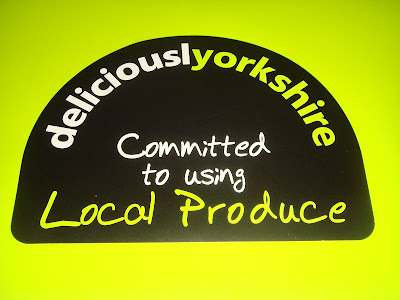 A vivid green envelope came in the post today.
I am now a member of the Deliciously Yorkshire Menu Scheme . This is the promoting,developing and supporting the food and drink industry in Yorkshire and Humber. It states that at least five ingredients on the breakfast menu are sourced within Yorkshire,Humber or within five miles of the county's borders and as I have been doing this for years I thought it would be a good idea to join and be counted as being proud to be in this Yorkshire brand. On the Welcome to Yorkshire.com website there is a part dedicated to Deliciously Yorkshire and although I am too late to get into the book this year I will be added to their website and allowed to wear the Deliciously Yorkshire apron -in other words a black pinny with some bright green words on. I may also treat myself to one of their Jute bag and hopefully remember to take it with me when I go shopping-I have the habit of never having one where I want one.
Posted by Anna Lupton at 22:23

Scarborough- A day at the seaside 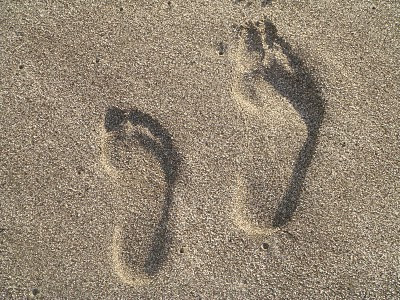 Our friends- Tony and Liz Fawcett have an apartment on the Northside of Scarborough above Peasholme. They are there for the week so Jack and I went over for the day.Thanks to Fiona who brought little Owen over to look after things here. We called in at Glaves the Butchers on the way at Brompton by Sawdon to buy some of their excellent pork and black pudding sausages. We were soon through to Scarborough sitting out of the balcony overlooking the sea. Liz and I nipped into town to pick up some ticket to see the preview Beauty and the Beast which have been kindly given to us by the YMCA theatre . For lunch we went down to the new cafe/restaurant which I think was called Oasis on Marine Drive. The food was ok, our only complaint was they got the order muddled up more than once.We then set off to walk along North Bay to Scalby Mills. The sand and the sea appeared very clean,there were not many people around and certainly no crowds as this is not the amusement end of Scarborough. Ideal in fact -a place to go as long as the weather is good so why do we all trail to the ends of the earth for our holidays when we have all this on our door step. We used the miniature railway to get back to Peasholme. It was a very laid back affair and very enjoyable as we waited on the station for the engine driver to have his mug of tea and tuck into his packet of chocolate biscuits and discuss with the ticket collector what had been going on the Saturday night before. Toot toot, the whistle blew,we were off something like a scene from Thomas and the tank engine. Through a tunnel,past the Open Air Theatre which plays host to Dame Kiri te Kanawa and Jose Carreras on Friday night,then it was time to disembark. Tony and Jack went to what was the corner cafe which is now the posh Sands complex for a drink.Liz and I went up into Peasholme Park,Jack giving us some money to buy an ice-cream. We recalled our childhood days when the tree walk was open at nights and how magical it was.Unfortunately it is long gone- the Red Indian campsite has replaced by a Japanese garden at the top of the mould. Our day at the seaside was nearly over . The weather had been perfect all day making for a very enjoyable day but reinforcing the fact of how lucky we are to live in North Yorkshire where it isnt far to travel to have a day by the sea and to get home in time for supper.... and a big hole in the living room wall but that's another story.
Posted by Anna Lupton at 08:23 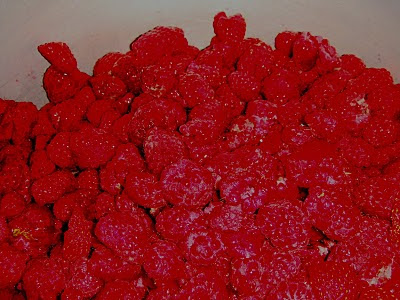 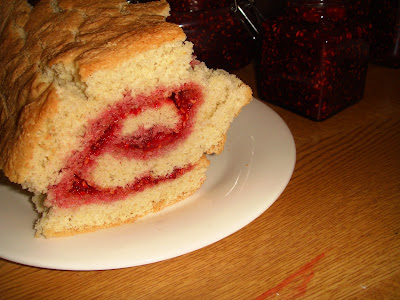 I have a busy morning as well as making raspberry jam I decided to make a video of it to show you how easy it is to make . The jam came out fine but unfortunately I didn't have much light on what I was doing and so all you would get would be a running commentary and nothing to see. So you will have to take my word for it within the hour I have make 8lbs of raspberry jam,got a hungry husband his lunch and made and roiled a Swiss roll for my Dad and filled it with raspberry jam, not that it would win in a show as it is not neat enough but I couldn't roll it in sugar and greaseproof paper as we are having to watch what my dad can eat.Jack has already a slice with no complaints. Also I have one very sticky camera.
I see we are on our last jar of piccalilli so hope the beans will soon be ready as I make large quantities of pickles. The biggest batch I made was 28lbs in one go -needless top say I couldn't face eating it for months. The fruit and vegetables are doing really well in the garden despite not having the rain I am trying to grow an olive tree but it is taking such a long time to grow -any tips would be appreciated.
Posted by Anna Lupton at 12:41 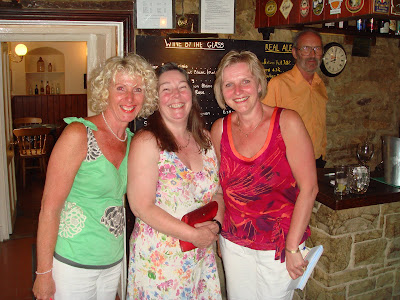 Jack and I went to the Wass village barbecue at the Wombwell Arms in Wass on Thursday evening. Here you see me in the middle with Joyce Ryan to my left who ticked me just as Jack took the photo and Shirley Nicholls to my right who did a sterling job of selling raffle tickets. It is an annual event and £600 was raised for the Macmillan Nurses. I took the photos and they are on Utube for all to see under - Wass barbecue 2010. The weather was kind to us, and I am sure everyone enjoyed themselves. Some of my guests went and the lady from Ireland won a snazzy handbag I had my eye on it in the raffle -talk about luck of the Irish. Next morning I welcomed her to breakfast with -"and A top of the morning to you" which made her laugh. I am used to speaking to guests from France and Holland in their language about breakfast and small greetings but that is about my limit. How I would love to be fluent in languages-what a talent. This morning the man from Ireland replied to what I had said the morning before- about been clarty referring to the weather. Clarty is Yorkshire- humid in weather - clarty is another word for sticky. These and other words that are dropped in conversations are quite amusing to non locals.
Posted by Anna Lupton at 19:19