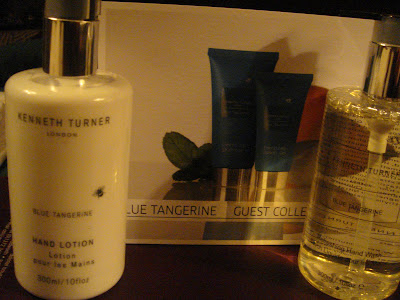 Every year we like to add something to what we offer here at Carr House Farm. For 2010 it was feather and down quilts and pillows,flat screen TVs and Roberts ipod docking stations. For 2011 we now offer a voucher service should you want to give a celebration gift. After lots of sniffing and sampling I have decided to introduce Kenneth Turner products into our rooms. I wanted a "story" as well as a product . Essentially English -I settled for British . Kenneth Turner grew up in Bangor ,Northern Ireland. Starting off selling flowers from a stall on Oxford market before becoming a florist. In the 1970 he opened his first shop in Avery Row,Mayfair. He holds a Royal Warrant for his fragrances awarded by HRH Prince of Wales. Kenneth is a one of the world's leaders in the design and creations of fresh and dried flowers. So now anyone coming to stay with us here at Carr House Farm can all enjoy a little bit of luxury which Kenneth Turner has created.
Posted by Anna Lupton at 07:22 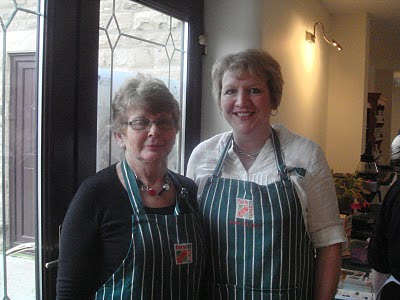 Today it was all hands on deck. Christine Ryder from Scaife Hall Farm rallied the troops- the Harrogate and Nidderdale farm holiday group . Even Christine's friendly Barclay bank manager spent the day in the kitchen. I went along to capture the day. I ended up tucking into a very nice meal around 2.30pm which is a really civilized time to eat. Chocolate would do me for breakfast any other day.Lindsey Hitchen from St George's Court opened her doors.We thank everyone who gave so generously. £300 was raised by the raffle to be shared between the Yorkshire Air Ambulance and ARC Addington.. There are two more days -so if you are in the area why not take a trip to Lindsey's farmhouse near Fountains Abbey . There is no doubt there is plenty to eat and drink. The Air Ambulances are going to be re-station. One at Leeds/Bradford Airport. The other is at Bagby which is only 7 miles from here.Lets hope we never have to call on it but reassuring to know it is so close. Two people we know very well have had to use the service.Jenny fell off her horse. More seriously Malcolm who has a hand made furniture business sew his whole hand completely off -within 12 minutes he was airlifted to the James Cook hospital. It is now back on and works quite well so I am told.
Posted by Anna Lupton at 21:38

Christmas has long gone and we all like an excuse for a good party. Many will be having dinner parties tomorrow night to celebrate Burns Night. If you haven't yet got you menu together you can use mine.Haggis,neeps and tatties -Quick and easy. Instead of me running about ten minutes before everyone comes trying to find a sword to cut the haggis I have decided on a safer option. Roast partridge-one per person -they will be stuffed with haggis. This bird is very easy to cook. Roast breast down for 25 mins. Turn over to brown the skin for another 10-15mins.On a hot plate spread you mashed potato into a round. Divide it into 4 making a gap between each portion. Add your mashed Swede to fill the gaps .You will then have the effect of the flag of Scotland. Sit a partridge stuffed with haggis on the top. Stew some pears lightly and have these in a little dish to accompany each plate.
Aldi you will find sells very good smoked salmon as voted by one of the top newspapers and far cheaper than most of there competitors. I will serve this as a started with a prawn souffle. Why people think souffle are like volcanoes I do not now. As if they re going to explode at any minute.As long as it isn't undercooked you will have no worries.
Raspberries will have to feature in the pudding as Scotland is renown for its raspberries.My Grandmother used to have them deliver from Perthshire to Coxwold railway station. My Grandfather would go with his horse and trap to pick them up.I guess around 100 years later I will be able to find some locally but I do hope they are from Perthshire. To start the pudding take some pecan cereal and soak in whisky for a few hours. Add maple syrup and whipped double cream. This needs to go into he fridge until you need it. Divide up when you need it and top with raspberries. I like to roll mine in Demerara sugar as I have a sweet tooth.
Lewis and Cooper for us but any good cheesemongers will be able to supply you with good Scottish cheese. You will also need oatcakes not digestives this time. As for the drink I will leave that to Jack. He had Geoff trying out some malts on Sunday.But I see a bottle of two survived the tasting along with a bottle of 10 year old Jura. Slainte mhath
Posted by Anna Lupton at 21:14 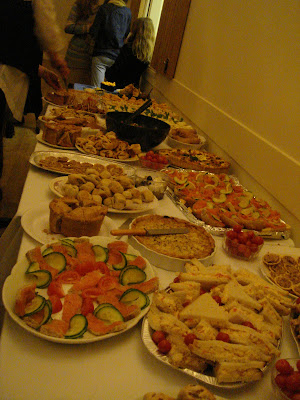 Villagers gathered together last night for the annual village do. There was a good turn out as there are only around 70 houses in the village. Plenty to eat and drink Then they got merry and danced. We got home 2 minutes before midnight. I wasn't chancing turning into a pumpkin. Shirley and Joyce bopped the night away till the early hours. It was nice to see young and old all joining in the fun. The village hall will be the venue for the pantomime next month. The cast have been busy rehearsing since before Christmas. Not only does the village do these events there is also a Christmas Dinner,Annual barbecue, open gardens and scarecrow display. This may only be a small village in North Yorkshire but it has a big heart.Guests staying with us at Carr House are always welcome to join in. And as there is a Royal wedding coming up in April don't worry if you don't get an invite there is sure to be something going on in Wass.
Posted by Anna Lupton at 21:08

Back to the Drawing Board with Susan Briggs 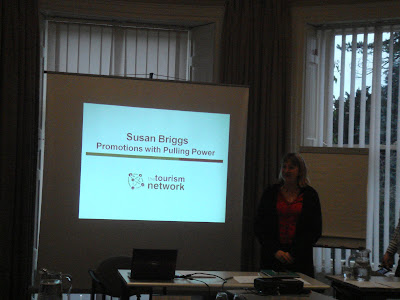 Attended a presentation by Susan Briggs on Tuesday at Knaresborough at Conyngham Hall. It was good to meet new and interesting faces, getting away from the paintbrushes of the last week. Had a chat with Jane Baker from Yore Vision and Penny Hartley from the Ripon Museum trust who runs 3 museums.Poor girl how she keeps all the people connected with running the trust I will never know.There was a man who told us his self catering cottages had ghosts in them . Hopefully they just appear to order. I would like to have spoken to Louise Reed from the Swaledale Cheese co.It was crack on and try to take in all the new information ,trends and technology for 2011. This course is one of 3,the next been at Northallerton.I made endless little notes and squiggles on my notepad. It will probably take me a week to decipher them.

Susan Briggs kept up her reputation as delivering a first class presentation. We are very lucky to have Susan to teach us. She is so passionate about her work. Susan's enthusiasm soon starts to rub off on all she speaks to.
Posted by Anna Lupton at 07:52 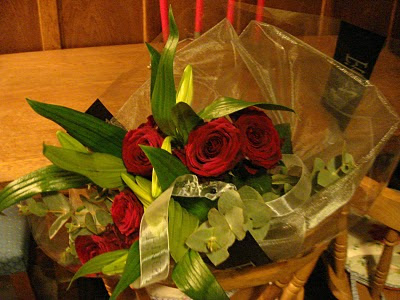 We are now into the New Year - ready for taking down the Christmas cards and decorations. Putting together new ideas to share with guests coming to stay with us. Plans to be made and ideas to be shared. I would just like to thank Nikki and Pete who are now running the White Horse in the village for the beautiful bouquet of flowers Nikki gave me today . Not only was it is lovely surprise but very unexpected to say thank you as Jack had brought holly down to decorate the pub.They haven't been at the White Horse long but with Nikki as front of house she has created the true village pub feel to it. They even have a fire in a chimera burning to keep their smoking customers warm when they go outside -now how thoughtful is that. Jack says the beer is good. The crack brings Jack, Butcher Geoff and Tony together There is many a tale told round the fire whether it is Ed who has been watching the football or Mark who has been out on a shoot. It now has a lovely atmosphere so friendly guests can feel quite at home here.It is only a small place but with a big heart.
Posted by Anna Lupton at 21:29