The Ryedale Grand Prix 2009 will be held on June 7th which is just on our doorstep at Duncombe Park with its HQ at St Albans Centre,Ampleforth Abbey,Ampleforth.The Grand Prix will use the now tradition course with Hovingham forming the hub for two rolling circuits which is 181kms in total.This race is now in the Premiem Calendar status. The event has been held annually since the death of Olympic Cyclist, Peter Longbottom whose home was in the area.This is wonderful countryside not only for the competitors but also the spectators to enjoy as well . Lets hope for perfect weather conditions and not too many punctures.The event has been generously sponsered by Greencrete and Halfords
Posted by Anna Lupton at 12:00

It is not everyday we get the postman bringing us mail from Japan.In an earlier blog you will read Keiko Igata, a well respected writer in Japan stayed with us last Dec. In the envelope was the mr partner magazine "for real life" where Keiko has dedicated a page to us with 6 colour photos,having awarded us a 5 star rating. Unfortunately we do not understand what she has written so if anyone can help us out we would be very grateful.I have now been asked to accommodate 3 Japanese journalists who will be doing a feature on the area in June and no doubt we will be posing for a few more photographs.
Posted by Anna Lupton at 22:28

Aviva Pearson has been appointed.....

I have just had an email through from Joan Lovejoy, who deserves a medal for keeping us all up to date with all the local news for the tourism in our area. Aviva Pearson has just been appointed the new chief executive for the Yorkshire partnership and hopefully she will help to boost the economy for not only the Moors and Coast Tourism area of which we are in, but the other areas of North Yorkshire she is in dealing with too. I look forward to meeting Aviva and listening to how she is going to play her hand.
Posted by Anna Lupton at 20:25 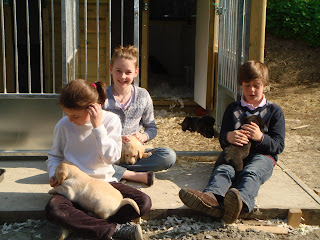 The photo shown the pups having their first French lesson. Recently les enfants de Chezelles who were staying with us from Monte Carlo and the pups loved the children as much as the children loved the pups. Tinas pups are now going to their new homes and we are keeping 2 but we still have a black dog puppy for sale . They are more or less house trained and down to 3 feeds of food a days . Talk about waggy tails they are such happy little dogs. Mine is called Tara.
Posted by Anna Lupton at 11:21

Yesterday I attended a meeting at the Arts Centre in Thirsk where I met Gary Verity for the first time .He is the head man[chief executive] for the Yorkshire Tourist Board .He is very approachable and is prepared to hear everyone's point of view. He has a major task in trying to keep us all happy, but he isnt short of ideas and lets hope they all work. With farming in his blood I am sure he will not be shy of hard work.I hope he will take on my choice for James Martin to be the face for Yorkshire.I was at the NYRM in York about a month ago at a do organised by Business Link and James Martin was the guest speaker. What a lovely guy ,I could have listened to him all night.I even woke Jack up when I got home to relay the tale of the pigs....Afterwards there he was signing autographs,shaking people's hands and having his photograph taken all the way through his meal and never complained once.We observed this as we were on the next table and talk about doing that extra mile .....He was pleasant,charming and totally unaffected by his stardom- a true credit to Yorkshire and to his mother ,who he spoke so affectionately of.Also while I am singing James' praises I am helping to raise funds for the Wass Village Hall rebuild and it was decided to approach James,along with a few famous faces of the area for a recipe for the book we are producing. Not only did he send more than one recipe but he sent one of his own cook book which he has signed and which I am sure will create more funds for the pot. Well done James,you have my vote for Yorkshire.
Posted by Anna Lupton at 15:45

Thank you for everyone who came on Sunday to celebrate Jack's Heinz birthday[57th]. The weather was perfect and we were all able to sit outside and enjoy the sunshine. It started off with nibbles and drinks for 20 but it somehow snowballed and ended up with around 60 for lunch. It was so nice to see old friends from racing, David Kinsella with his family,David and Pam Shields, for who Jack had ridden their famous horse Tilston so many times also Geoff and Ann Thornton who owned Carfield. David was quite impressed by the stool I had painted by Nichola Graham from Tockwith that he would sit on it -next best thing to been sat on Tilston he said. Sorry that Pat and Robin Tate and Karen and Nigel Tutty were not with us, along with others but some are still in the saddle and it was the point to point at Pendle Forest. At 2am on Sunday when I still had to dip strawberries in chocolate I vowed never again....but I guess I will soon be planning the next get-together.
Posted by Anna Lupton at 14:11