We have just heard we have been chosen as finalists of the Welcome to Yorkshire prestigious White Rose Awards for 2015. It is very exciting and in my old age I went quite wobbly. I mentioned being wobbly on twitter and I think it nearly started trending. Up to now we don't know where the awards ceremony will take place or when. We will have to be patient until this is announced but know from attending past events that it will be a glitzy night. Thank you to all family,friends and customers who have supported me every step of the way to getting this far. The photo below was taken on my birthday earlier this week. With 3 special people in my life- Mum ,dad and son Nicholas .The 4th special person is behind the camera- Jack. Dinner , we have dinner at dinner time which means 12 noon for Yorkshire farmers. What better than 3 ribs of rare roast beef with my Dad's home grown potatoes and mothers homemade mint sauce. The roses are out of my Dad's garden too . 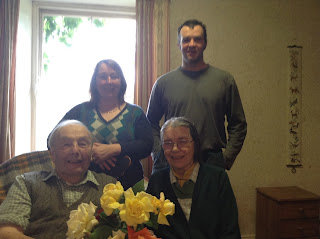 A rich heritage in the North York Moors

This weekend great celebrations have been taking place all over the country as it marks the 800th year of the signing of the Magna Carta. HM The Queen was going to Runnymede and I was going to the tea party in Helmsley Castle with Christine and her son who had bought medieval costumes for the celebrations. It is the grand finale of the weekend where Helmsley people and their friends can picnic in the ruins of the Castle grounds. Cold weather has stopped play but guess there will be some brave enough to still go. Meanwhile we have tried the cake at home. My Dad gave it the thumbs up and Jack was tempted to have another piece. I needed to make a cake which would travel and we wouldn't have sticky fingers eating it. So all the ingredients went into the cake. It started off with a basic butter chocolate cake and then the fun began ,,==...what should I add... I tried to think of what they would have added 800 years ago I de-thawed some cherries which I had picked from one of our trees last year as there is nothing fruit wise in the garden at the moment other than rhubarb. Then I added cream and some oil seed rape combed honey that had thickened and I couldn't spin out. Vanilla and ground almonds and roll on 800 years - a bag of Maltesers. 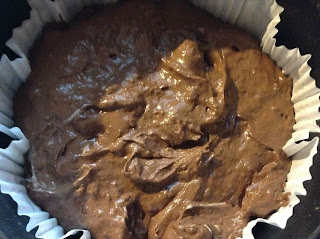 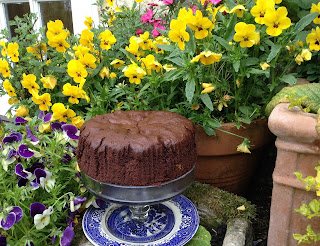 Dont ask me what quantity I put in as I never weigh things. And then cooked it slowly in the bottom of the Aga.I felt as we live in the #CapitalofCake it was only right I made a cake to celebrate and therefore I have named it my Magna Carta Cake. It actually tasted good even before it was baked
Posted by Anna Lupton at 17:53