Market trader for the day...

Not that I shouted "Roll up ,Roll up".... there was no need  as I stood there with my stall at the first Ampleforth Village Market.

I now have such a lot of respect for these market traders who do it day in and day out. This was a one and only for me . I came up with the idea of having a village market at the White Swan in Ampleforth. After they had won Yorkshire's Favourite Pub out of 700 entries as a friendly family pub I needed to come up with an idea to help other small businesses in Ryedale. I am on the board for the North York Moors Leader project and so very in tune to how a little bit of help is worth a lot of sympathy syndrome . The White Swan was the ideal venue....with a large car park and enthusiastic owners.

The markets are to be held monthly on the last Saturday in the month. The Christmas one being scheduled for the 23rd December.

Annabelle Robinson is taking over the day to day running of the market. Annabelle has had a lot previous first hand experience, coming well recommended. To be honest I just dont have the time .
Annabelle's parents were involved with setting up local farmers markets within the county.  Annabelle became involved and worked alongside her from parents. She therefore had first hand knowledge of the pitfalls and obstacles that can come with running a market. There is a Facebook page, twitter account ,lots of posters to put up, accounts to keep. Also behind the scene things to organise. Insurance policies to check along traders licences too.
I had 4 hours sleep the night before and I am now getting too old to survive on this .

The weather was perfect and I was on site by 7am to set up. I then dashed back to cook breakfasts for my guests .By the time I got back at 9.30am it was a hive of activity ready for the 10am start.

It was supported well and nice to see a lot of locals, 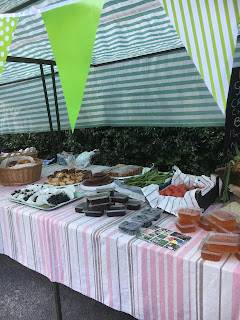 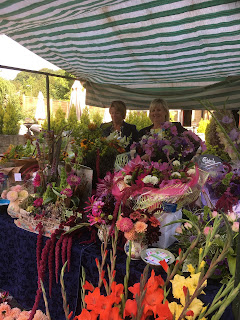 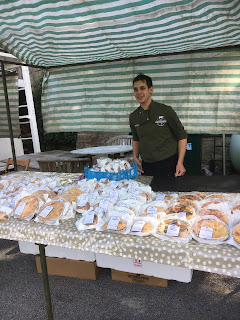 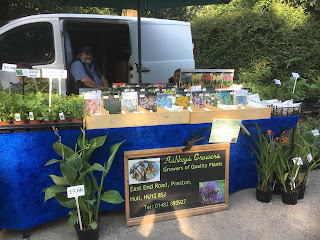 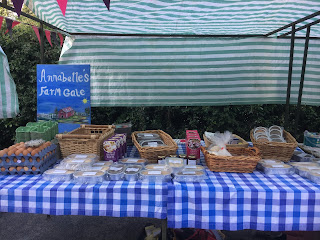 around who stopped for a chat. Many thanked me for coming up with the idea. A great way to spend a Saturday morning. Thanks  to Josh Finn who came along with his guitar and "busked" for us.

There were so many lovely stalls ,stallholders and tempting things to buy. We have a waiting list of stallholders wanting to come next month -30th September.

Thank you to everyone who made this event go so well. I hope it will continue to grow and flourish.
Posted by Anna Lupton at 10:35

Ampleforth and its history..

Ampleforth Village
Ampleforth is an attractive village situated along the southern slopes of the Hambleton Hills, along the spring line which has assured a good source of water. The slopes run down to the Coxwold-Gilling Gap, a valley about six mile long and one an a quarter miles wide, which separates the Hambleton and Howardian Hills. The river Holbeck runs through the valley. The underlying soil is Kimmeridge clay and gravel. Historically, the village has existed since Saxon times and you can still see remains of the Saxon three field strip system, to the enclosures and high farming of the 1800‘s on the hill to the north of the  village. It is mentioned in the Domesday Book.
The village is in the Ryedale district of North Yorkshire, about 23 miles north of York and 4 miles south of Helmsley. The main street of the village forms the southern boundary of the North York Moors National Park, with the northern area in the park, and the south outside. Ampleforth Parish covers an area of 2,420 acres.
The population of Ampleforth Parish, according to the 2011 Census is 1,345, with 760 in 342 households and 585 in Ampleforth College. The only major local employer is Ampleforth College, with farming, tourism and support services, the main occupations.
For electoral and administrative purposes, the parish of  Ampleforth is part of Ampleforth Ward, along with other parishes: Coulton, Oldstead, Byland with Wass,  Gilling East,  Scackleton, Cawton and Grimstone. Ampleforth Ward is part of Ryedale District Council, a district of North Yorkshire County Council.
Historically Ampleforth was divided into three parishes or “wapentakes”, which meant that there was no overall squire and a community of freeholders began. This encourage a diversity of religions from the catholic community at Ampleforth Abbey to a quaker settlement in Shallowdale. The West End has been referred to as the “Protestant End” and the East End the “Catholic End”.
Until immediately after the Second World War, Ampleforth mainly consisted of houses built along the main street which serves as the principal thoroughfare, and St Hilda’s Walk. Most of the buildings date back to the 19th century and are built in local stone. After the war the village began to spread southwards and further east. Most of the construction took place in the 1960s, including a small council estate. In spite of their current age, these properties and those around Mill Lane and Fairfax Close are still referred to as  “The New Estate”.  Construction still continues today including the development of Abbey Gardens around 2015.
Posted by Anna Lupton at 22:08

It has been quite a time since I first visited Hovingham Market. Last Saturday I just had time to nip out and catch up with a few old friends who ran had stalls there, the Honey Man Adrian Wilford,who comes to see me every year with his official bee inspectors' hat on  and ,Justin Staal who sells the most amazing smoked fish- no wonder he wins prizes for it and was almost sold out when I got there. Cathy and Nigel -Ryedale Cheeses had their caravan there and Haxby bread man - well who could resist that bread.
The were new faces to see to a very pleasant girl selling chocolate and supporting the butterflies. Martyn the butcher who always was at Helmsley on a Friday on the butcher's cart selling amazing pies and a lovely hand painted board caught my eye to Annabelle's Farm Gate who was selling delicious puddings, fruit crumbs and chocolate tiffin. Also she was also selling was children's baking kits.
So I came away with bread, chocolate ,a pudding,cheese and 5 pork pies. I was very tempted by the pottery buttons too, Maybe next time. 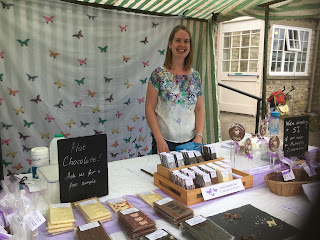 So I came away with bread, chocolate ,a pudding,cheese and 5 pork pies. I was very tempted by the pottery buttons too, Maybe next time. 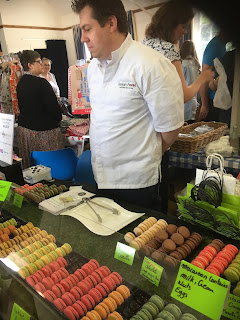 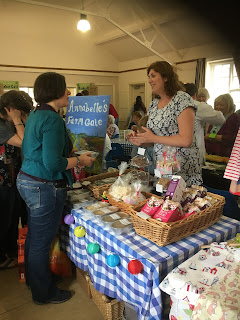 On the last Saturday in the month the 26th August which is the bank holiday weekend Ampleforth will hold its village market at Yorkshire's Favourite Pub -the White Swan in Ampleforth right in the middle of the village. So I hope to see you there. I for one will be taking a very large basket . 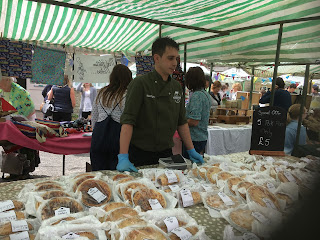 An invite to York Art Gallery last night so I took along my friend Rachael....

Picasso: Ceramics from the Attenborough Collection 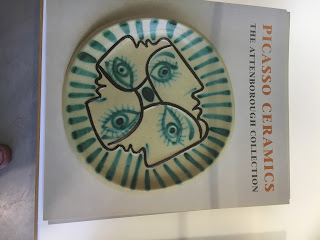 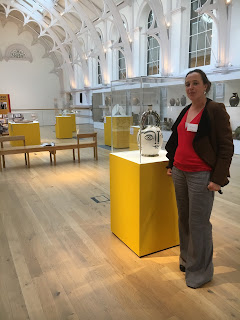 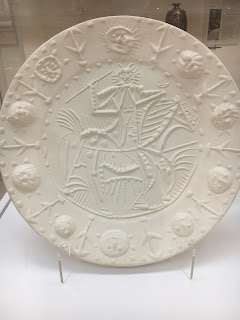 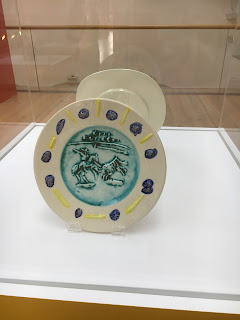 'In a previous life Rachael lived at Castle Howard and was surrounded by works of art and as we toured from one room to another she was disappointed that there were not price tag values on the work. Each to their own and we were privileged to see the collection but I do think is her oldest William who is 7 had been let loose with a lump of clay he would have probably being able to make something similar but then his name isn't PP.
Posted by Anna Lupton at 23:24