Making sure all is rosy in the garden

We have had the privilege of Mr Ronnie Rawlins and his wife Marlene spend a night with us recently. Mr Rawlins was the person who created the Ampleforth rose and as now we are the only people in the world to have a rose bed growing 25 of these beautiful primrose coloured roses. Here you see him taking a look at them. We were very impressed with how they had grown since we planted them in the depth of winter in January 2015. I think we must have better soil up here in North Yorkshire as even Mr R was delighted with how they had grown. Huddersfield I guess doesn't have such fertile soil as we have here. Our garden in south facing too. And not a bit of black spot in sight. My uncle was the rose grower in our family and now my Dad has followed on. My favourite has to be a beautiful old striped rose called Harry Wheatcroft. He has 2 Geoffrey Smiths which must be 10 foot high at least and were only planted a couple of years ago to celebrate his 90th birthday. Hidden away in his garden my Dad has the only Ryedale rose so far that I know has been released to the public kindly given by Ian Rogers ...to see how he came on with it. It came as a very tiny looking ball of roots and has had 3 flowers on this year. They were yellow too. Mr Rawlins kindly brought me, which I quickly handed over to my Dad, another rose .This remains a secret for the time being. All I can say it has been 5 years in the making. Never has one been seen like it before and may be announced at the 2 big Autumn flower shows. It was lovely to have the Rawlins stay with us and hope to see them again next year for their yearly inspection. 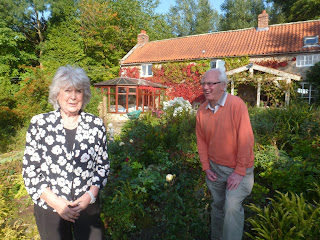