Friday night saw 160+ people, representing 11 hunt from all over the countryside, turn up in the posh togs to celebrate 100 years of the running of Ampleforth Beagles.  The evening was arranged by Kate Mould who turned the Feathers Hotel in Helmsley into a very glitzy affair. Well done to this young lady who in the coming season will be the first female to wear the green jacket  to run with the beagles.
We were sat on the ever gracious Lady Clarissa Collins table who you can see having a word with Richard Waind - a local butcher.  We had a very enjoyable evening with Jane and John Cranage, their son Tom blew us in for dinner. This is his last season with the beagles and next season he leaves to to to the Zetland and ride with the hounds. Later in the evening Tom was presented with a silver horn which he blew without taking breathe for 25 seconds.
The welcome address was made by Michael Spencer QC followed by Grace said by Fr Hugh Lewis- Vivas.
We then tucked into a roast beef dinner was down of quantities of liquid refreshment. There was the Loyal toast and a toast to the Hunt. Tom was presented with his horn and also a book from the Zetland by Ian Kibble MH followed by the Guest Speaker -Martin Vander Weyer -who is the business editor of the Spectator and lives in Helmsley.
There was dancing until dawn and carriages at 1am. We had as you can guess left well before then.  Not our usual Friday night but so pleased that we went to celebrate this milestone in the Ampleforth Beagles history as Ian Kibble said we wont be around for the next one ! I took the obligatory selfie -dont know if that was a good idea but it is one for the album. 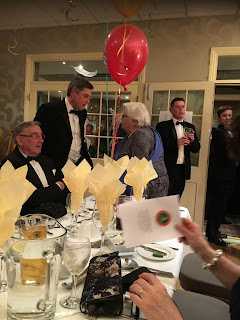 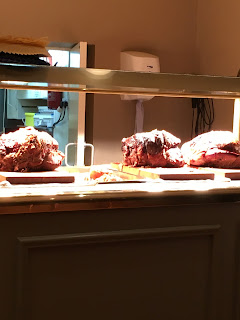 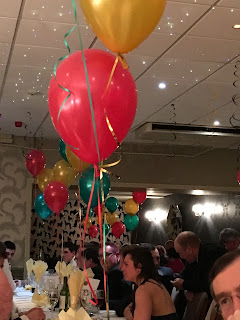 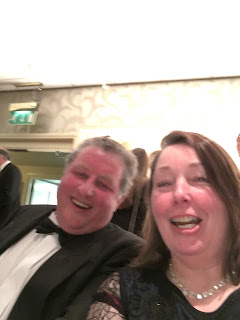