This week I hosted Keith Gilks who is a journalist for Cycling World Magazine. I was lucky to be able to call on a few businesses I know to help make Keith's stay even more tasty.
Primarily he was in Yorkshire to cycle ,but I wanted to make sure he had the very best of food and drink too.
The White Swan in Ampleforth feed the very tired Keith and after a few pints of baa baa Black Sheep his aching legs were a thing of the past.  He started with Pork and Apple Terrine and had Plaice rolled in Smoked Salmon to follow in the most sublime of lemon cream . I mirrored him on this, while Sarah Barrowby who had come along to talk "cycling" we must not forget why he was in the area. Sarah opted for the Plaice as well but started with homemade soup. There was no room for puddings.  Emily Slingsby very kindly organised that Keith receive a selection of Ampleforth beers which her husband Andy brought to the White Swan for him. A real ale man, Keith was delighted. It was a vey pleasant evening spent in the White Swan which has been newly refurbished and was lovely and warm too which is something the some eating places just don't seem to get their heads around . Quite "Hygge" infact.
After a nights sleep that Keith said he had slept like  King ! It was time for me to serve breakfast. A full Yorkshire of course complete with my son Nicholas's venison sausages.
Soon it was time to say goodbye to Keith and off he went on his next cycling adventure heading in the direction of Sutton Bank.
Hunters of Helmsley had kindly made him a packed lunch with goodies from their deli counter and some Hustwaite apple juice.  Hunters won the Best Local Shop in Great Britain and rightly so ...we love their rare beef sandwiches. As we were not sure if Keith was a rare beef man they opted to make him a cheese and ham one,which I guess was very tasty as they cook their meat on site. I often  get a whiff of their meats cooking when I go by their doors.
Keith's next port of call was Whitby and home for the night .I  just knew he shouldn't miss a trip to the Magpie and a quick call to Ian's team and a place was booked for him for 7pm. The last thing I heard of Keith was a photo he posted on social media of a very large portion of fish and chips curtesy of the Magpie.
Thank you to all you wonderful businesses that made it possible to turn Keith's trip into an even better one than he had expected. Jack often says to me if you are going to do something, do it right and I think we all did . 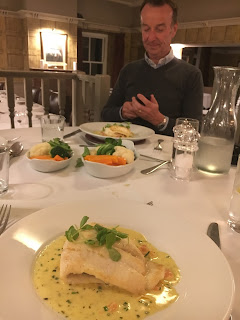 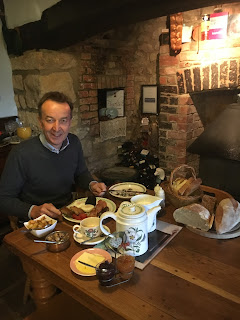