The Razzle and Dazzle of The White Rose Awards 2017

The White Rose Awards 2017 was this year held at the Leeds Arena. We were lucky to hitch a lift with fellow finalists The White Swan of Ampleforth ,who were up for the Best Pub Award.  We were finalists for the Best Bed and Breakfast Award. We were chauffeur driven by Dave, who works for Robert Fawcett who owns Studford Lodges along with the White Swan . Last time we went we nearly took the top off Jack's pickup when coming out of the multi storey car park -so no such worries this year.

Always with glamour and show stoppers ,we were welcomed by some very colourful and very very  tall ladies.

We had cocktails thanks to Slingsby Gin and the event got underway to the swirl of Bagpipes and a marching Pipe Band, all dressed in their kilts . There is something about this music that immediately makes you want to get up and disgrace yourself trying to dance a Highland jig. Just to let you know I didn't.

The meal started with smoked salmon , which was delicious from Bleikers. Unfortunately the food went down hill from there. But the company was good and the wine flowed and all was good with the world.

It was nice to see such a lot of people we knew, as we were sat in an ideal place to see people coming and going.And the lighting was far better this year.

We did not win, but  very happy to be a finalist and even prouder when 'we" flashed up on the scene. The photo I had chosen was that of one of the grandchildren walking across the garden in front of the house.

We finally got home at 1.45am and Jack had to be up by 4.30am as he had to get ready with his dogs to go picking up on a shoot. I surfaced a lot,lot later. 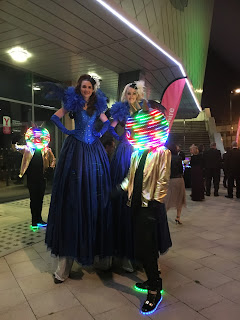 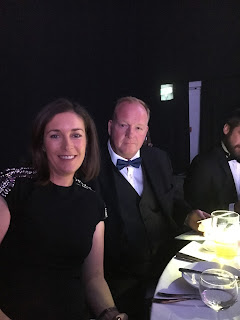 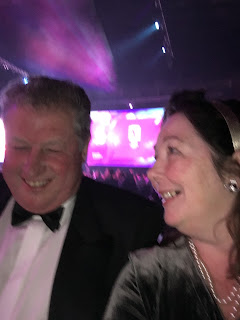 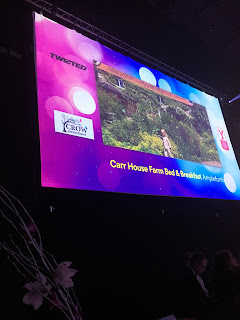