Our Tree of hope ... a Chinese Fossil Tree ..or Dawn Redwood. and a London Plane

Dont you just love it when the light comes through and refreshes a tree which you thought had died. It was nearly cut down ,but we had never got round to it.Surrounded by other trees it lay dormantt for many years. After the tragic accident when our dogs died Powergen/Amey came and took 19 trees out. We also decided there was some which we growing too tall around the house that we need to take out too in case they fell on the house. In less than 2 weeks this tree has sprung into leaf and to watch the leaves quivering in the wind is quite breathtaking. Also when you thought this tree was a yew and in fact it is Metasequoia glyptostroboides, the dawn redwood, is a fast-growing, endangered deciduous conifer. It is the sole living species of the genus Metasequoia, one of three genera in the subfamily Sequoioideae of the family Cupressaceae. One of the most exciting discoveries in the plant world during the last century was undoubtedly that of the deciduous conifer, the Dawn Redwood, Metasequoia glyptostroboides. In 1946, acting on a tip-off and sight of some fragmentary material, Professor Cheng of the National Central University, China, sent an expedition to the remote village of Mo-tao-chi in Szechuan province to collect a complete set of specimens from a stand of recently-discovered, unidentified trees. After consultation with Dr Hu, China’s leading dendrologist, it became obvious that the trees belonged to the genus Metasequoia, hitherto only known from fossil evidence dating back 100 million years, and thought to have been extinct for 5 million years. Also we learnt that the tree we thought was a Canadian Maple is actually a London plane tree.We have had to have it "manicured" as it had some diseased branches, but the Arborist assures us it will grown back now into a fine specimen . The London plane is thought to be a cross between the Oriental plane and the American sycamore – both of which had been introduced to Britain. By chance, one of each species had been planted in the London nursery garden of John Tradescant, the younger which cross-pollinated to produce a new hybrid. It was first noticed by Tradescant – a famous botanist – in the mid-17th century and named after the city where it originated. Planting of the new hybrid across London started in the late 18th century According to the London Tree Report, the London plane tree is one of the most 'important species' in Inner London (but not Greater London). It is rare that it is found growing this far north Of London . As I will have mentioned before my Dad is a great believer of planting trees for future generations and has told us where he has planted some others . So we now need to go exploring. 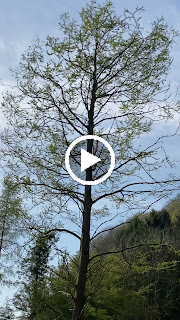 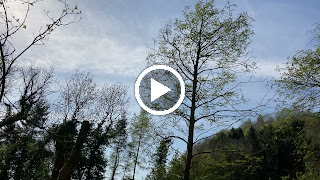 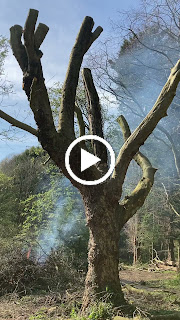 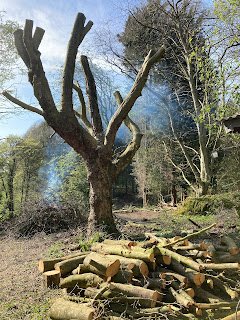