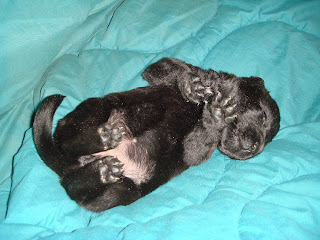 This is why I have not been blogging for a week or two. This little Labrador has been taking up the majority of my time. It had to come into the house where it has made its home on top of the Aga.This week her eyes have opened and it can now hear. As soon as you rattle about in the kitchen it is up to the door of its little pet house to want to be feed. Ellen the vet from the Skeldale practice in Thirsk told me it would be better on goats milk rather than the orphan lamb milk as I was feeding it through a pipette.The roads were so bad I had to get Jack to take me down to Tescos in Thirsk to get some goats milk. I was delighted to find it is actually from Seaton Ross in North Yorkshire. It is called St Helen's Farm and has been a life saver for this little pup which now looks like a miniature black bear.besides milk they produce yogurt,cheese and butter. You may like to look on their website which is www.sthelensfarm.co.uk.
Posted by Anna Lupton at 13:56