When we were recently at the Carpenters Arms in Felixkirk I picked up a leaflet which had their forthcoming event on. Now one was a wine tasting evening ..Those who know me well will tell you I think wine is like vinegar I just don't like it unless it is something ridiculously sweet like a pudding wine.I stuck to water. But what did interest me was the food that went with it. A duo of starters - both a white and a brown crab dish as well as crispy fried bely pork. A duo of mains which comprised of sea bass and breast of guinea bird and topped off with pudding. We have a Kiwi girl staying with us helping so she came along with us too .There were 5 glasses of wine and between 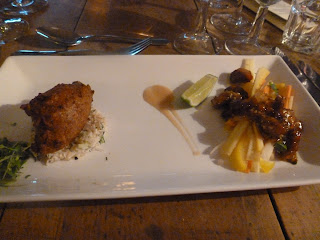 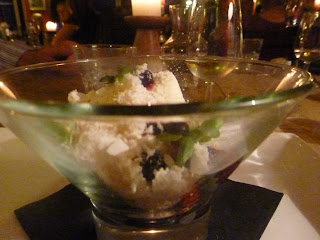 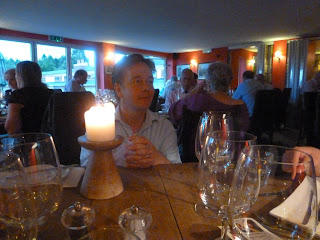 them Jack and Libby polished off not only their own but mine too .So everyone was happy. The dinning area was packed and Debbie Whitwell was looking after us all perfectly. The wines were Australian and hosted by the very easy going and delightful Scott Patrick from Corney and Barrow. he was very down to earth and not stuffy at all. He even supplies a wine, a Merlot 2009 from Pyramid Hill,Hunter Valley that are no longer in production so I did just taste that just to say I had had some. Libby had been to The Lane.Adelaide Hills where the Unwooded Chardonnay 2009 came from so they chatted away for quite a time. Scott was very good and spent time at every table talking to people. Apparently all the Providence Inns do these sort of events so you may like to go along and see for yourself. It made a nice change Sorry I had nearly eaten my main course when I remembered I hadn't taken a photo of it
Posted by Anna Lupton at 22:38