Welcome to 2014 - the year of Le Tour Yorkshire

This is set to be an amazing year for Yorkshire. Thanks to Gary Verity who secured the deal of Tour de France coming to Yorkshire. We are hoping to showcase and turn the county yellow.Find sheep wearing yellow jumpers along with planting tons and tons of yellow flowers. I had suggested planting sunflowers but they will not be out in time. #AnotherGoodIdeaBitesTheDust. But no doubt Gary and his team at Welcome 2 Yorkshire will wave their magic wands and make other amazing things happen. The idea of the sunflowers came via my Dad as I remember one year he planted a couple of acres in one of our fields near the roadside to cheer people up.The amount of people who stopped to take photos that was back around the time of box Brownies. So here you see him getting ready for Le Tour Yorkshire. At 91 he uses the bike in the house if the weather is bad.He wants to be ready to set the pace for the big cycle race. He has decided that he will probably not compete on the day and give the young ones a chance. He 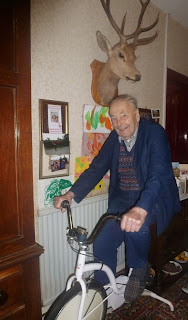 uses the bike most days to stop his legs getting stiffened up. 2013 was the first year he had not been combining the crops as the steps up to the controls were him are too wide between for him. And my mum didn't like the thought of him hanging on to the grain pipe 15 foot in mid air -the width of a chimney pot and swinging it back if it got jammed.He didn't 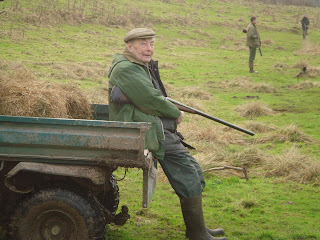 know what all the fuss was about. He still drives a tractor and up to now is having an excellent shooting season. Onion seeds are planted and he is well on the way to getting the most out of 2014.
Posted by Anna Lupton at 12:47