The new guest arrives most mornings between 8 and 8.40am -wonder if he smells the bacon and sausage as it cooks on the Aga and the smell escapes up with chimney . He is always in a rush. Although quite a celebrity in his own right, he seems very much opposed to having his photograph taken. As I have no "paparazzi" wide lens camera so it has taken me a few weeks to be able to get a clear photo of him. And for the non believers here are some photos to prove he exists. At first I thought I was seeing things. Jack thought he had probably rolled in some ash or it was the sunlight that was shiny through a grey coat.But no here he is larger than life and twice as beautiful -our very own wild white squirrel. Yes white - would love to say he was a red one. We would dearly love to see them back in the area. For now we will have to make do with him 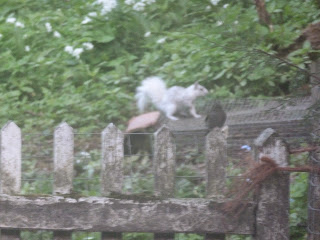 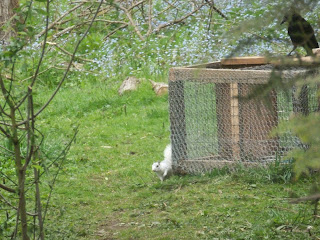 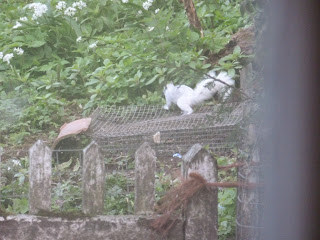