September what does it mean to you ?.....Carluccio's have launched #MadAboutMushrooms, which brings me to write this blog.
I have loved September and all the memories it holds since the year dot. No longer do I have a pony to ride around the fields looking for mushrooms. Transferring them from perfectly formed fungi into a Mother's Pride waxed bread packet and getting them back to the farm the majority of which were only good enough to put in a stew. The buttons were fried for tea with home cured fat streaky bacon. Who could ever forget ?

Life goes on but we still go mushrooming. The mushrooms still grow in the same places within the backdrop of Byland Abbey.  As I said to my Dad, who is 94 in 2 weeks time -he was driving the mule [a mechanically version not animal by the way]  Did we have more hours in the day then? No came his reply things went at a slower pace.

My Uncle Fred was the horseman and it was when I was tiny he would lead me around the fields on my pony looking for mushrooms . I was perhaps 3 at the time. Fred  would lift me down to watch him cut the mushroom with his knife and then I would pluck it out of the grass and he would lift it up again and off we would go in search of the next mushroom.  There is still something magical about picking mushrooms. Go early in the morning when the dew is still on the grass. Mother Earth is a great provider. 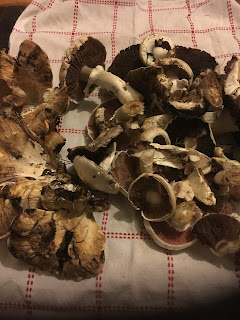