He is George to most, Granddad to others and Mr Lupton when he gets his "Sunday best" name. To me, he is my Dad who I have been known to call him Georgie Porgie. On September 25th 2021 was his 99th birthday entering his 100th year.. We had a few days of getting out and about. He had just been over into the Dales to buy 100 plus sheep and then on the Wednesday we were off to Filey for a 99 icecream - well you just have to do it. Often he has been too busy in the garden to go to the seaside but with glorious weather and chnace of a spin out in Jacks vehicle we sent off in style. Those disability badges are good things as we parked up on the sea front to enjoy the icecream and look out to sea.then I popped in to the seafood cabin on the Cobble landing to get a sandwich to take home- 2 prawns and 2 crab for his tea. We called in to see his old friend,Frank Turner, who is a butcher in Rillington as he wanted some pickled tongues to cook. Frank was out and there were no tongues in the shop so slight disppointment. All in all he had a good day. Friday brought two friends from the village who brought him some biscuits. One day in the week he had been with Robin to pick some field peas and then shelled them for his dinner. I had gone to the house and he wasnt in and thought he must be down the garden. next thing he zooms into the yard on th emule. Another day someone arrived with homemade pickle. He got 20 cards and was busy be ringing everyone up to say his thank yous. He couldnt believe it when a surprise package arrived from Betty's and all he kept saying was what have I done to deserve this. His request for his Sunday dinner was to have some beef from one of the heifers that Nicholas had taken to have cut up to be then sold in the Wass Farm Shop. It was very good and like any true Yorkshire man on his plate was Yorkshire puddings too. 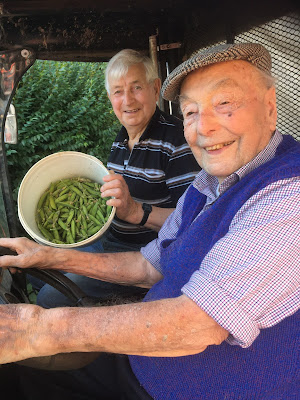 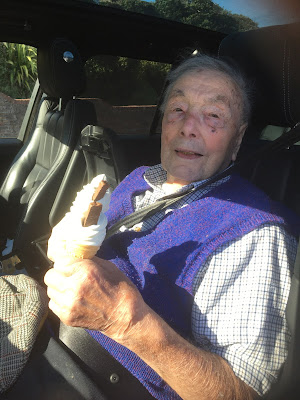