The White Horse of Kilburn

Our local landmark, The Whire Horse of Kilburn. our very local area's landmark . When you think of Disneyworld and the Princesses Castle, here you think of the White Horse. .When Jack sees this he sighs relief as he knows he is nearly home. Carved into the hillside above KIlburn it is only 3 miles from us and you can park your car at the bottom and walk up the steps at the rear end and then walk along the top of the glider field and back down through the forestry .If you are feeling energetic you can walk from here or take a longer path and walk on to Sutton Bank and down to Lake Gormire White horse The White Horse was designed and financed by Thomas Taylor, a Victorian businessman, and was cut in 1857. A native of Kilburn, he worked for a London merchant. He had seen the famous chalk hill figures of southern England and wanted to create something similar for his home village. The village schoolmaster, John Hodgson, and helpers did the work. He marked out the figure of a horse on a hillside high above the village. A team of thirty-one volunteers did the actual cutting. When the shape of the Horse was complete, they deposited 6 tons of lime on the naturally greyish rock beneath to whiten it. The White Horse is 314ft long and 228ft high and about 20 people could stand on the grass island, which forms the eye, though walking on the horse is now strongly discouraged. Unlike the horses in the South of England which are cut into chalk and are therefore naturally white and virtually self-preserving, the Kilburn white horse is cut into limestone, which is the wrong colour and needs artificial whitening. This was first done using gallons of whitewash, but now chalk chippings from the Yorkshire Wolds are used. Its conspicuousness hasn't always been considered a benefit; during World War II the Horse had to be covered over to stop it becoming a target for German bombers! 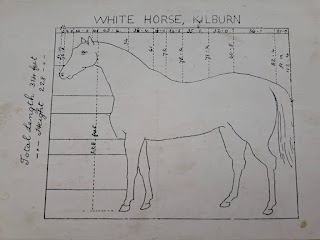