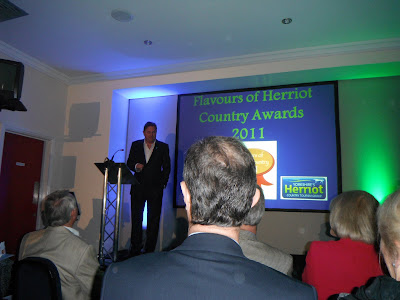 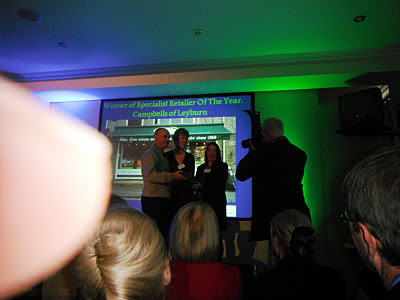 First it was the AGM at Slaley Hall at the beginning of the week.On Thursday I was in my "better clothes" avec mon Vivienne Westwood earrings as I was attending the Flavours of Herriot Country awards. Jack and his Cuckavalda Gundogs were sponsoring while I got the job of presenting the award for the Best Specialist Shop.Ian Ashton had organised the event. The main sponsors was Welcome to Yorkshire and Gary Verity as usual delivered an excellent speech.Jules Bellerby from BBC Radio York then took to the stage.Annie Stirk did the first presentation with grace making it look so easy.Then fourth down the line it was my turn .Grace is not something that I am linked with.I was so worried that I would go flying headfirst of the stage. All too quickly I was there, terrified, up on the stage trying to look as if I knew what I was doing.The lights were so bright I was squinting like a ferret out of a hole. And the winner was .....Campbell's of Leyburn. I am dreading the photos being in the papers as I know I will get a lot of friendly flack from locals.Both Mr and Mrs Campbell were there to receive the trophy - a wonderful glass state of the art piece in a lavish box.Between my knees knocking and Doug Campbell's hands shaking we managed to keep it in the box and all got down from the stage without any mishaps.Well done to all those who won and for flying the flag for Yorkshire.
Then came a speech from James Herriot's son-Jim Wight. Both he and Rosie Paige, his sister, were there. Jim talked about how much his father related Yorkshire and food together and went on to talk about Snaff Peckitt. Snaff was a relation of Jacks-his dad's cousin. Like all Peckitts he was a character. Snaff did very well in the war years when he sold his pigs on the black market. So fat was the bacon James Herriot could only swallow it with vast amount of piccalilli on.Where have I heard that before. Heard it- I know because I was brought up with tat bacon That is not a spelling mistake it was fat but as a little girl I couldn't say fat and said tat.My Dad stills ask me do I want "tat" as I like to eat the top off the meat.Though we don't have meat like it used to be I also try to buy it with a good layer of fat on as it cooks better and certainly tastes better for having it. And so the yarns go on.
Posted by Anna Lupton at 22:20