Staithes on a dark November evening

Had the pleasure of going to the opening evening of Vicky Dixon and Matthew Asquith's new venture. Better known for their Whitby Seafood co and Whitby Crab co. Vicky has now got another string to her bow.They have taken on a b and b in Staithes with a restaurant underneath. It has even been renamed The Endeavor Kitchen with rooms. There was quite a gathering of foodies including Amanda Wragg and Jill Turton, 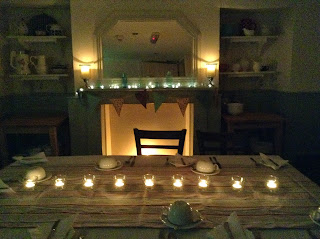 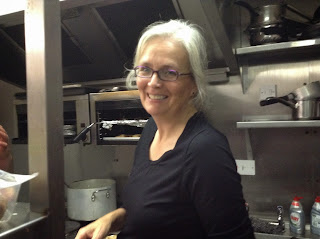 both who write for the Yorkshire Post. The last time I met Amanda was in the Michelin starred Pipe and Glass kitchen run by James McKenzie.Tonight we tucked into soul warming seafood chowder . Followed by pulled pork and apple sauce rolls along with other tasty goodies rolling out of the kitchen. Tricia Hutchinson was in the kitchen tonight. We shared a table with John Stokoe the journalist and his wife and young daughter. We all agreed to return sooner rather than later. The Kitchen is going to be open from 8am throughout the day. So if you are venturing to the coast why not pop to Staithes and make the Kitchen your port of call.
Posted by Anna Lupton at 20:43