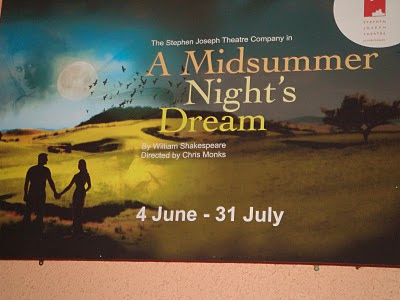 Many thanks to Ruth Puckering and the Stephen Joseph Theatre for their kindness in offering us some free tickets as a hospitality provider to see the performance of A Midsummer Nights Dream by William Shakespeare, directed by Chris Monks. It was only the 3rd nights performance which runs from the 4th June to the 31st July. The cast were very entertaining. My favourite was Puck played by the amazing Clare Corbett she just had heart and soul in her performance- her movements totally equalled her voice.
I don't think I have been into the theatre -dare I say-since the early 1970 when I was at college there and went to see the controversial Clockwork Orange when it was a picture house. Scarborough has come a long way up the social scale with its entertainment values since then.
Posted by Anna Lupton at 15:35