Now there are big tractors.... 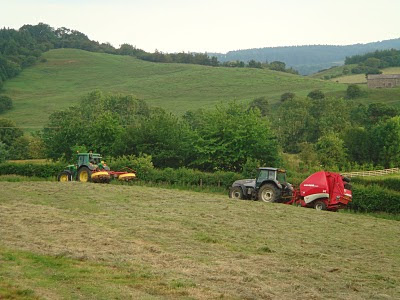 and machinery to make hay and silage.Jack made some lovely hay last week, as soon as you stepped out of the door you could smell it.It smelt just like the good old days. Unfortunately we had a thunderstorm last night and so we are rushing to get it all baled up and got Rod Teal to come.
When I was a child, the hay was led on carts pulled by horses and as children we would stand on the top probably ten foot or more high and jump on it to squash it down.There was no health and safety regulations then.When the cart started back to the farm we had to sit in the middle at the top of the load in case we fell off. We have a field called the Stripe which runs at the side of Craykeland and it was full of butterflies. We had picnics and the men wore shirts without collars and threw the hay up with pitchforks on to the load. We had shire horses and at night after they had finished work ,their harness would be taken off and they would stretch their neck out to drink out of the fold trough.They seemed to drink for every more. Then with a halter they were led to pasture for the night. I would be only 3 years old but my uncle would lay an old hessian bag on the quietest horse,throw me up on its back and I would ride back to the field holding on to its mane.When it was time to get off although he would have been there to catch me I would flip myself over holding on to its long mane and then slide down its leg. In those days there wasn't play areas for kids-swings and slide- we had our own portable ones those beautiful Shires horses -Patch,Prince,Dapper Bonny,Blossom .... How I wish our grandchildren could experience such times.If you would like to see the utube I took -go to Rod Teal baling at Carr House Farm ,Ampleforth,