We had the pleasure of looking after a party of guns from France. It seemed Le Grand depart has already started for us. My part in this was to supply the coffee before they set off and then lunch. Strong coffee with slices of sweet cakes and sweet bread was served outside in the warm morning sunshine. The red and white checked table cloth came out and I welcomed them in my best French. Managed to ask how they were,telling them my name and I was l'espouse de Jack.Whew the hardest part was over .. I needed to make an impression with the lunch. It was not a grand affair but a quick warming lunch but I wanted to make sure this Yorkshire woman could give any la chefesse a run for her money. I made tomato and roasted pepper soup .The tomatoes were out of my Dad's greenhouse so I knew I had the taste. This was served with crisp chesses biscuit on the side topped with clotted cream .Quite a feat to transport them from kitchen to table and Jack did a really good job not letting the biscuits fall into the soup .I am sure they knew they had to sit proudly on the side A la Raymond Blanc. They must have like it as they held their bowls up for second helpings. Hot steak pie followed with roasted sweet potatoes which I had cooked in butter and olive oil with a ton of garlic and Cornish sea salt. The French men's eyes lit up at the sight of so much roasted garlic I am sure they had never expected it. 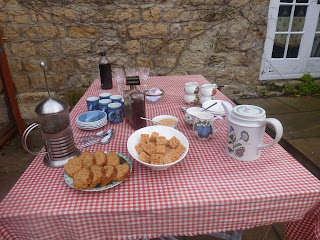 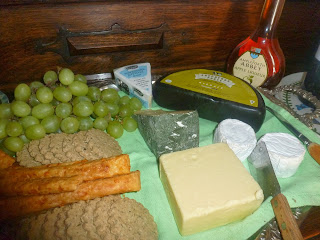 Even though I say so myself that garlic was delicious. The finale was thanks to Shepherd's Purse who had supplied me with a cheeseboard. Ampleforth Abbey liqueur was on offer too. I had tried to give them a taste of Yorkshire and I think I succeeded.
Posted by Anna Lupton at 20:32