We had a request to land a helicopter.With a few hundred acres to choose their landing place it was near the road as the birthday girl who was arriving in it was then going to have a trip down memory lane. I took my Dad down to watch -there is something about helicopters which I find really exciting. Soon we hear a noise in the distance and then the helicopter came over the hill into view. As it got closer and it put on its landing lights as it hovered but finally landing 30 years from my car. The blades whipped the dry grass up and it was hard to stand up as I filmed it land. The trip had been arranged for a lady's birthday by her family. She was transferred into a wheelchair before getting to the car as she was not well. We chatted with her and she was over the moon at what was her birthday surprise. She told me we used to come when the children were small probably 40+ years ago and stay with a Mrs Peckitt at a farm at Byland Abbey .You probably wont remember her -it was a long time ago. Not only did I know Mrs Peckitt -she is my mother -in -law, so that was a delight for her. I told her she had now retired to the village and gave directions to go to see her.They went to the White Swan in Ampleforth for their lunch and a little tour around and to view Byland Abbey which the lady loved so much .A week later we got a lovely card from her daughter thanking us for using the field to land.I haven't her telephone number to reply but it was a pleasure and we were touched that we could help this 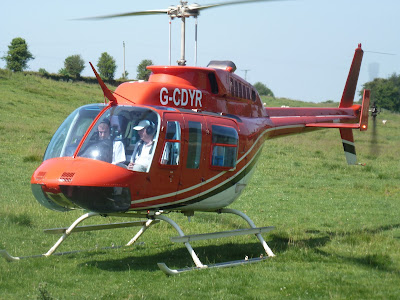 lady have a lovely birthday
Posted by Anna Lupton at 20:08