Now don't get too excited. This isn't Monte Carlo and there was no sign of a racing car. these were racing cyclists. So dedicated that had to fore go a good Yorkshire breakfast for double helping of porridge pasta and the like. The ladies had an early start with the men's at a more leisurely time of 1.15pm. The girls came from Aberdeen and Edinburgh while the boy racer was from Hampshire. We have since heard that although he didn't win he has been offered a professional sponsorship which his family are very excited about. Having got him to sign the guest book I might have just got the signature of the future Winner of a le Tour de France. I thought he would have been more excited about competing in the Olympics but he said no the creme de creme was Le Tour. The racing on Sunday was the Peter Longbottom memorial. It starts at Ampleforth College which is just 5 minutes in the car from here so we are ideally situated for it. 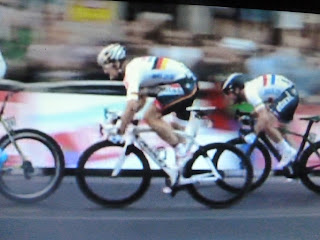