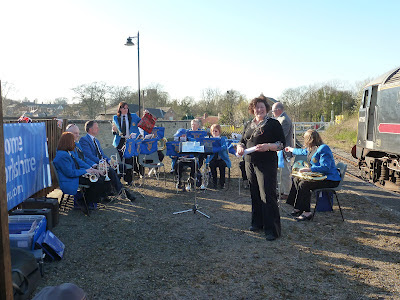 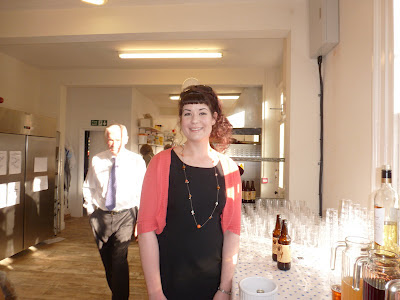 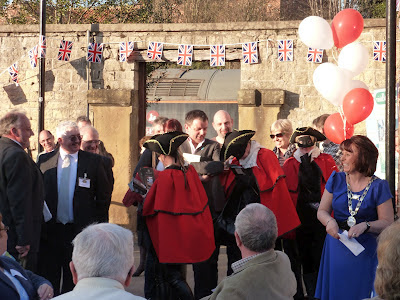 I had a wonderful evening out on Monday. It started in the station yard listening to Bedale brass band. Bread Actually had made wonderful eats for us. The beer was supplied by Black Sheep Brewery.Carol from Big Sheep Little Cow was rushing around making sure everything was running smoothly. Ruth Annison is such a heroine from Outhwaites the Hawes Ropemakers was there working hard as usual.Ruth had been up printing brochures off until late into the previous night for us .She deserves an MBE for all she does. It is thanks to her I have become interested in the Wensleydale Railway.As funds allow the line keeps getting longer.It now ends at Redmire but hopes are that it will eventually link the East coast main line at Northallerton to the Settle -Carlisle line.This was a night out for our Herriot Group but is part of Welcome to Yorkshire. David Shields, Peter Dodd and Rachel Smith were just on the train. I say just as the Lady Mayoress was attacked by "Dick Turpin" alias Jessica Barker of Thief Hole Cottages as her 3 helpers surrounded Peter and David. Firing her pistol in the air Dick Turpin grabbed a bag full of money. The further up the line we went the more amazing the scenery was . There were 7-8 deer which I noticed out of the window -I needed Dick Turpin's gun to ensure venison for supper. We had a stop at Redmire as the sun was finally setting over Coverdale and beyond. By the time we got back to Bedale station it was dark and time to go home. Thank you everyone who made it such an enjoyable evening.
Posted by Anna Lupton at 21:56