Antonio Carluccio has long been a favourite of mine. I think the Italians are probably the best chefs in the world. Pater Caselli I considered to be the best butcher in the world. A dear family friend from Monti Flori who will never be forgotten. Both great mushroom hunters. My dream can true the other evening as I met Antonio in person. It was a gala dinner which was held on the Saturday evening of the Malton Food Lovers Festival. Tom Naylor Leyland was in charge to see the event ran smoothly and he did a brilliant job despite the late arrival of the red carpet.The atmosphere was up beat and no one cared whether 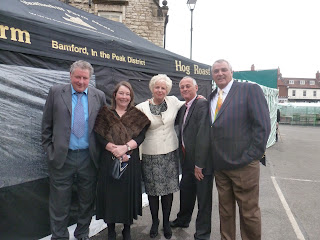 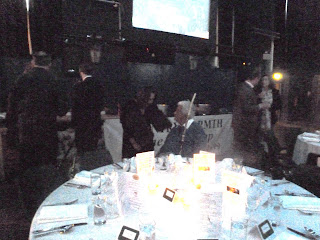 there was a red carpet or not and that the smoke alarm went off numerous times . How exciting when we sat on the next table to Antonio. Canapes were followed by Sand Hutton Asparagus, A Tuscan fish stew followed but Antonio told Jack that he thought it was a bit smokey. And he was so right -very kippery Jack was more interested in the Great Man's walking stick and they had a deep conversation about that. Lamb from Kirks the butcher followed. Maybe it was some of ours as Richard often buys animals from us .It was over cooked and so I will say it wasn't our lamb. Finally we had as one would expect from a Tuscan menu a lemon tart. All washed down with copious amounts of Montes Wine.part way through the evening the person to my right had left his chair and I was honoured as Antonio spied the empty seat and can and sat down again with us. I would have loved to have invited him to come for bed and breakfast as he looked very tired and I guess a couple of nights with us would have put him right. there would have been plenty of sticks in the wood for him to make another walking stick. Jack was all for training a cocker spaniel up for him to scent out the truffles and no doubt he could do that- all we need is a truffle. Apparently Antonio has a sausage dog.
Posted by Anna Lupton at 23:05