Appley Dappley which to choose...

Can't believe it is a year since we were at Rogers Roses at Pickering to choose my Dad's apple trees. For some reason we didn't get them last year so when I got a phone call out of the blue to say My Dad had ordered 4 apple trees 2 pear trees and a cherry I was a bit flummoxed. They were ordered last year they said. When you are 91 I was surprised he had ordered then a year in front. Fortunately I was able to say we would go to pick them up.It had to be organised around the days my dad would be shooting . To miss a day's shooting was something that does not occur.Plant for future generation I think should be our family's motto. The apples were still on display and so my Dad did a good inspection of what fruits these trees grow. It has been a wonderful year for fruit and I use for breakfast as they have pink flesh. Discovery apples have finally ripened – in early September – about a month late according to many people’s idea of when it should be ready to eat. Not only are they delicious but also the skin colouring in many of them is intense, t 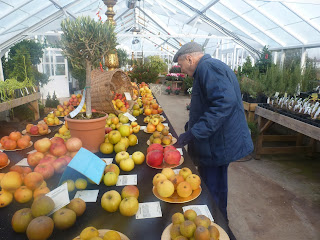 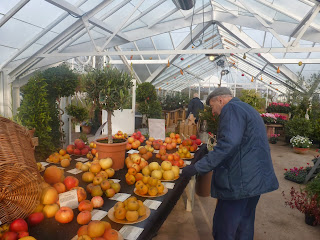