Grow your own fruit and Father

Well he may be 97 but he still knows how his garden should be laid out.

Recently I planted strawberry plants, with father sat on a stool giving instructions. I had then gone home  to get some jobs done here. He is so particular, they have to be put in dead straight rows and so far apart. Well he is a perfectionist when it comes to his garden and then when you finished you rake over the soil so no one can see your footprints. He gets unbelievably pleasure from working in his gardens yes gardens he as more than one . I do it as a chore.
The first garden as you go through the kitchen garden gate now has strawberries nearest the house..as well as some raised beds a bit further down. His idea is as we have cats, they tend to hang around the hedge and when I throw some scraps out, this is the nearest place to relax in the sunshine and nearest to the kitchen door they then  dart through the hedge. And with them being there it tends to keep the blackbirds off the fruit.  After I had gone he had planted 50 onions, then there is a cabbage patch and then he has a line of grafted twigs which I think are fruit trees and then 3 rows of rose bushes . Honeysuckle  climbs over the stone wall here. The next garden to the left Jack has been over and rotovated in strips and is ready to work and plant more vegetables  and here he also has a rows of sweet peas . To the right is the walled garden in front of the main house ,which leads a to a summer house and a rose garden and further through are orchards all enclosed in the main walled garden .A lot of the stones came when people could go to Byland Abbey and take the stones from there in the late 1800s when the house was built. The grass is ready for cutting as Nicholas s ducks spent half the winter escaping on to it but their droppings have certainly fertilised the grass. Round the edges he has his bedding plants, his 100 year old rose bushes that smell divine and his newly planted peach tree. He did have a banana tree which I bought back years ago from the Lost Garden of Heligan but after a couple of winters it died off. There is also a pampas grass in the corner. Dont think it was a sign of him been a swinger in his earlier days ...wasn't that the secret sign in the1960s or so they say .
This garden in its hey day had a cast iron fence round it and there is steps that lead into 2 further vegetable gardens. Nearest to the wall he plants runner beans so we can reach them easily when we have to pick them as from the flower garden we have a 3-4 foot advantage. They grow up for Jack to escape up the beanstalk.  The rhubarb grows on the hedge side here and there is then an opening into the bottom garden where his green houses are and cool frames and eucalyptus tree .This is where we were working today . Raspberries canes must last for years as he said the ones that were nearest the green house that had belonged to his cousin,Billy Buckle,who was the head keeper of the local estate and he died at least 50 years ago !.

So I dug the holes and he held them in straight with his walking stick on the roots and then I filled them in. We will have to wait for these new ones to have rasps on till next year. . 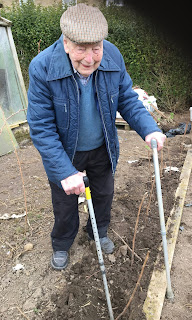 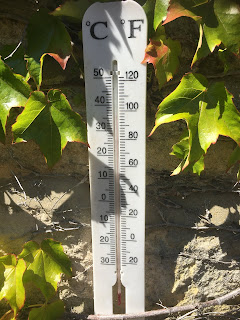 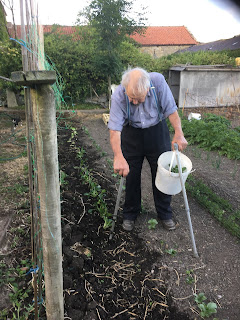