Take 36 for Captain Thomas Moore. We salute you .

I feel really honoured that I was asked by Welcome to Yorkshire to join in on a video  and say Well done and Thank you to Captain Tom who has now raised over £20m for the NHS. An amazing achievement for an amazing man. Everyone of us must feel incredibly humble at what he has done .and his attitude to dealing with Coronavirus .
I am sure you will have all heard of this Yorkshire man but an extract from Wikipedia
Jump to navigationJump to search

Thomas Moore (born 30 April 1920), known as Captain Tom, is a former British Army officer, best known for his philanthropic work. Moore served in India and in the Burma campaign during the Second World War. He later became an instructor in armoured warfare. After the war, he worked as a managing director of a concrete company. He also raced motorcycles. On 6 April 2020, at the age of 99, he began a walk around his garden in aid of NHS Charities Together during the COVID-19 pandemic, with the goal of raising £1,000 by his hundredth birthday. So far, he has raised over £20 million and a further £3.7 million in Gift Aid.
He is an aspiration to us all. and truly hope he gets  a knighthood for this as he deserves one....and tea with the Queen .
We were given about 30 minutes warning to get the video over to Tom at Welcome to Yorkshire so Jack was the film crew. I think he did good job on what he called Take 36.
Also representing Ryedale was Andrew Pern from the Star at Harome with his pint glass and Beki form Slingsby caravan Park
i would have liked to have added to the video you are welcome to come and stay.We have ground floor rooms and my dad was is 97 and his friend Raymond Whitwell who is 101 would have had a lot to talk about .There isn't many of them left and they are precious people. Great men , wise men and proper men. 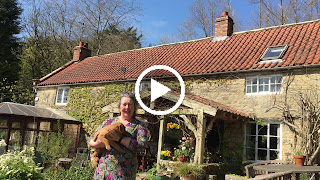